By Newsroom on July 16, 2013Comments Off on Ben & Jerry’s ‘San Fran-tastic’ Ice-Cream Flavour was Available for Just a Day

As part of its City Churned campaign, Ben & Jerry’s set out to create an ice-cream mix that is as unique as San Francisco—how the city’s namesake ice-cream would taste was put up to a poll and the locals got to vote on the ingredients that goes into it. 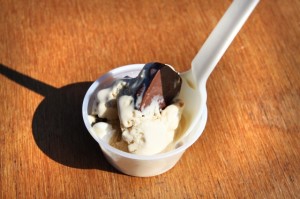 After a month of voting, the result was announced over the last weekend and the winning flavor is “San Fran-tastic”, a “caramel ice-cream with graham crackers covered in chocolate from Kika’s Treats, milk chocolate from TCHO Chocolate and pieces of marshmallow”.

TCHO and Kika Treats are San Francisco-based companies who beat the intense competition for a place in this special San Francisco-flavored ice-cream—reviews for this limited edition flavor has been observed to be very positive.

Unfortunately for ice-cream lovers, San Fran-tastic was only available for one day at the announcement event and would not be sold in stores—so, if you have managed to grab a scoop or two of it, lucky you.

Ben & Jerry’s ‘San Fran-tastic’ Ice-Cream Flavour was Available for Just a Day added by Newsroom on July 16, 2013
View all posts by Newsroom →