By Newsroom on August 7, 2017Comments Off on Birds Eye Deli Unveils New ‘We Prep. You Cook’ Campaign by JWT Melbourne

The delicate, step by step craft of transforming the humble potato to a Birds Eye Deli chip is explored through six different worlds, in a new campaign developed by J. Walter Thompson, Melbourne. 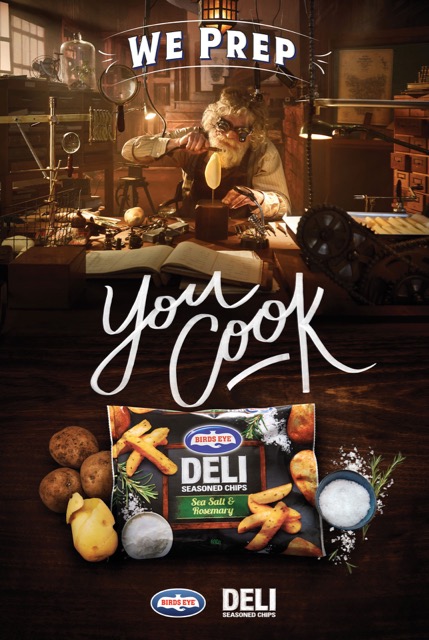 The ‘We prep. You cook’ campaign introduces a new brand platform for the premium Birds Eye Deli chip range, showcasing the key steps of making the product through a series of unusual characters. From potato beautifiers and a Topiarist, to an eccentric chip cutter and a mountaineer reminiscent of Edmund Hilary in the Arctic, each were chosen for their unique skillset, and pictured in an equally unique environment.

Jess Lilley, CD, J. Walter Thompson, Melbourne said: “We wanted to develop a creative platform for Deli that shifts people’s perceptions of the frozen food aisle. The concept of ‘prep’ moves the conversation to one of choice over convenience. With Simon Harsent directing, we were able to beautifully execute our pride in the creation of a bloody tasty chip.”

Under Harsent’s creative eye, the team created six, movie-like sets for each of the characters. Shot at Fox Studios, they all featured 7m by 3m hanging backdrops that were propped out mid ground with working mechanical sets. This created depth within the dioramas and gave each scene an added level of craft and quality. 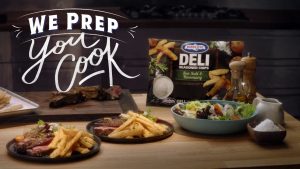 The music was also composed with the same care; layering sounds to create a rhythmic soundscape, marching the piece to life. One ton of dirt and 320 potatoes were used to create the finished product.

Suzanne Harman, marketing GM, Birds Eye said: “We really loved collaborating with JWT to bring the ‘We prep. You cook.’ story to life. It really dials up the attention we put into each step of the process, and enabled us to make heroes out of every day cooks.”

Birds Eye Deli Unveils New ‘We Prep. You Cook’ Campaign by JWT Melbourne added by Newsroom on August 7, 2017
View all posts by Newsroom →