By Newsroom on November 3, 2015Comments Off on Bisto Unites Family In Touching New £3.5m Bisto Made Simple Push

As part of the Bisto Together Project, McCann London has created a new campaign showing the power of home-cooked food to bring people together.

Launching two new range under in the Bisto Made Simple brand, the “Bisto New Baby” campaign, focuses on a young couple that has just had their first child.

In the TV ad, Bisto captures the magical moment when the baby’s grandmother meets her grandchild for the very first time. While she spends time with her new granddaughter, dad cooks the family a delicious, wholesome meal, made simple with Bisto. 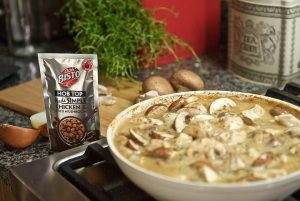 The campaign launches new ranges to the Bisto Made Simple range, Tray Bake and Hob Top. The 30-second TVC is the latest instalment in the successful Bisto Together Project bringing loved ones together, which first launched in 2014.

The campaign, which includes radio ads, breaks early November across the UK.