By Newsroom on December 20, 2016Comments Off on Blink Digital Takes the Sleuth Approach to Unlock KFC’s New Product from the US in India 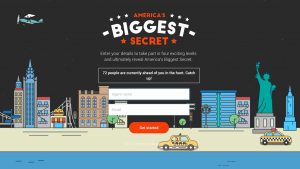 Digital agency Blink Digital has devised a fun yet innovative route for launching KFC’s latest product from America in India. By creating a microsite the agency took gamification to the next level by asking participants to unlock the biggest secret to discover KFC’s latest product launch! The objective behind creating the microsite was to enable secrecy and build hype around the launch of the product. The campaign titled America’s biggest secret saw over 50,000 registrations within 3days of its launch!

The pre-launch campaign comprised a microsite with 4 different levels which led people to reveal America’s biggest secret. The first three levels included the Oval office, Las Vegas and Los Angeles each of which were based upon the hidden objects game wherein participants were to find 6 hidden frames in the allotted time frame of 30 seconds. In the final level, the participants had to enter the correct state number as an answer to the question they received (as per the allotted map). Based on this they were shown the image of the new product. The microsite was live from December 16th, 2016 till December 19th, 2016. 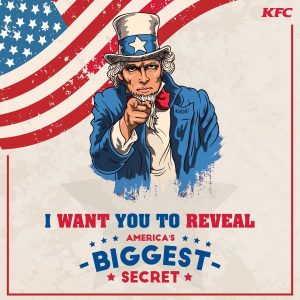 Speaking about the campaign, Dooj Ramchandani, Co-Founder & Creative Director, Blink Digital, said, “With time and attention at a premium, consumers are increasingly looking for fun and engaging activities that can offer add-on achievements. With this campaign, we wanted to challenge our consumer to be an agent and uncover ‘America’s Biggest Secret’ while fostering a more meaningful connection to the product being launched.”

Luiz Ruiz Ribot, KFC India’s Chief Marketing Office added, “In order to create intrigue around a new KFC launch, we created a unique game based on the current fascination towards all things American, from the oval office to Hollywood. At the end of the game, consumers discover that the biggest American secret being revealed is a cult-like following chicken recipe from Nashville which we are now launching in India. This interactive way of pre-launching KFC’s new Nashville chicken is truly addictive and a great way of keeping users hooked.”

Blink Digital Takes the Sleuth Approach to Unlock KFC’s New Product from the US in India added by Newsroom on December 20, 2016
View all posts by Newsroom →