By Newsroom on November 27, 2015Comments Off on Boursin to Organize “The Heist of the Century” with Y&R Paris

Boursin (the Bel Group) and their agency Young & Rubicam Paris have decided to put on a “marvelous spread” for the end of the year.

By means of a new European campaign – launching in the UK as of December 1st, Boursin intends to reach high and wide in reaffirming its So French vision of pleasure, where elegance and indulgence go hand in hand.

In this new chapter from the Boursin advertising saga, Young & Rubicam and Bel have made the bet and distanced themselves from the usual standard codes of the food industry, and are now taking us away in a real action film where the hero is none other than then inimitable Boursin cheese.

Directed by Markus Walter (Iconoclast Productions), the film’s intrigue centers around four characters – each as eclectic and mysterious as the other – that above all, are determined to leaving nothing chance when enjoying their Boursin, always according to the rules of the art. 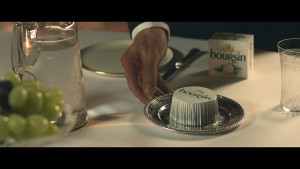 It’s a deliciously breathtaking story, embodied by a cast worthy of an “Ocean Eleven” movie with an original music score composed by Matthias Biermann, and a transcendent Boursin inspired by Jean Poisson’s camerawork.

This is a manner in which Boursin can display its difference – with the audacity and humor that distinguishes the brand. And above all, to remind all epicureans that every detail counts when it comes to pleasure, in particular, Boursin pleasure… As it is concluded in the new international brand signature “Pleasure is très serious!”

The campaign – supported by an ambitious media campaign during the end-of-year holiday season – will be comprised of a main film in various formats (60”, 40”, 30”) for cinemas, TV and displays, as well as 4 short formats of 20” to allow spectators to follow each of the characters.

The first airings are planned for the UK and Holland on December 1st, and on French screens as of December 7th.

Boursin to Organize “The Heist of the Century” with Y&R Paris added by Newsroom on November 27, 2015
View all posts by Newsroom →