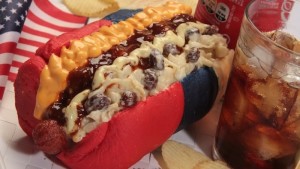 A Brazilian hot dog vendor has taken inspiration from the FIFA World Cup to create a number of “national” hot dogs.

The “World Cup Dogs” match the colors of their respective countries’ flags and are loaded with gourmet ethnic ingredients.

WDOG’s prime location next to the Arena Corinthians Stadium makes it a “must eat” for football fans of all nationalities. For those whose teams are still in the tournament, the nationally branded franks might be an obligatory purchase while in Brazil.

The American WDOG may be the most traditional of the group– piled high with mustard, mayo, cole slaw, cheddar cheese, and barbecue sauce. 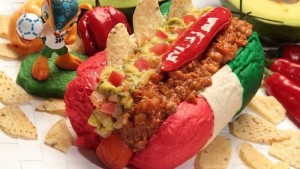 The Mexican WDOG is stuffed with Doritos, guacamole, spicy chili, and topped with a red pepper.

It’s no surprise that the Brazilian WDOG has been the most popular thus far. It comes with Brazilian feijoada (described as beans and meat with a sauce), banana flour, bacon and cabbage.

Things get a bit more creative with the Italian WDOG. The traditional sausage is replaced with a mozzarella cheese filled polpettone and topped with tomato sauce and basil. 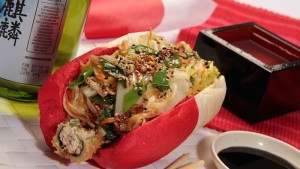 Even more unique is the Japanese WDOG. A hot sushi roll takes the place of the sausage, and traditional Japanese sukiyaki, tare sauce and sesame seeds are placed on top.

Last, but not least is the Argentinian WDOG. The blue and white bun is filled with a traditional sausage dog and adorned with garlic mayo, vinaigrette, yellow pepper and chimichurri sauce.

The WDOG creations are an ingenious blend of international culture and Brazilian creativity. The world’s best football team will soon be named– but the battle for the most delicious hot dog is long from over.