By Newsroom on July 2, 2015Comments Off on Britain v USA: Burger Battle Kicks Off on Independence Day at Manhattan Grill 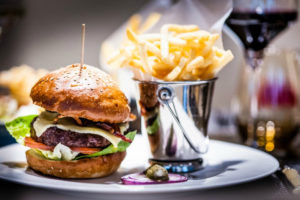 One of London’s prime steak restaurant, Manhattan Grill, will launch its new burger menu with a special American Independence Day offering, which will see the British Isles go head to head with America once more – in the form of two delicious burgers.

For those who don’t want to take sides, Manhattan Grill will also serve ‘The Other’, a beautifully tender lamb burger, topped with pickled red onions, coriander and mint yoghurt.

It recently beat nearly 40 top restaurants (including NOBU and The Chiltern Firehouse) in the Restaurant of the Year category at the prestigious London Lifestyle Awards and was named one of the Top Ten Steak restaurants in Bookatable’s Restaurant Awards.

All three burgers will be available throughout July, so head down to show your true colours in honour of Independence Day.

Britain v USA: Burger Battle Kicks Off on Independence Day at Manhattan Grill added by Newsroom on July 2, 2015
View all posts by Newsroom →