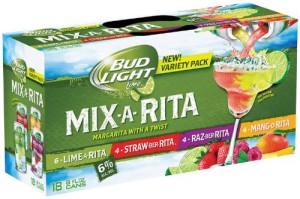 The brand anticipates continued success with the launch of Bud Light Lime Mang-O-Rita and Raz-Ber-Rita. The new Ritas are 8% alc/vol flavored malt beverages that blend the refreshment of Bud Light Lime with the taste of authentic mango and raspberry margaritas, respectively.

“Lime-A-Rita and Straw-Ber-Rita are two of our most successful innovations to-date. They allowed us to introduce the Bud Light brand into occasions it hadn’t traditionally played in,” said Rob McCarthy, vice president, Bud Light. “We anticipate Raz-Ber-Rita and Mang-O-Rita to continue extending the brand successfully into the popular margarita space. With four permanent Rita flavors to choose from, and our new convenient mixed pack featuring them all, we’re excited to see consumers experiment and create their own “Mix-A-Rita” combinations.”

To encourage mixology, the brand is offering a four-flavor Mix-A-Rita 18-pack.

The new Ritas join the popular Bud Light Lime Lime-A-Rita, Straw-Ber-Rita and seasonal Cran-Brrr-Rita. Over the past two years, Lime-A-Rita and Straw-Ber-Rita have combined to drive the most share growth and become one of the most successful new innovations in the beer industry.

Straw-Ber-Rita was the largest share gainer in the beer industry in 2013; Straw-Ber-Rita and Lime-A-Rita represented the No. 1 and No. 2 brands in the FMB category. Combined, the Ritas are larger than the category’s next seven brands. Additionally, Cran-Brrr-Rita, which launched this past winter season to positive reviews from consumers, exceeded expectations and effectively extended the seasonality of the Ritas family.

Bud Light Lime Ritas are best enjoyed over ice and are an ideal choice for parties and outdoor refreshment, especially as the weather gets warmer. Mang-O-Rita and Raz-Ber-Rita are available in three pack sizes: 12-pack 8 oz. cans; four-pack 16 oz. cans; and 24 oz. individual cans. The Ritas are also available in a Mix-A-Rita 18-pack, which includes six Lime-A-Ritas, four Straw-Ber-Ritas, four Mang-O-Ritas and four Raz-Ber-Ritas.