By Newsroom on November 4, 2016Comments Off on Budweiser’s Ad Pays Homage to One Man Who Should Have Seen the Cubs Win

He loved the Chicago Cubs. He loved Budweiser. To the point he proclaimed himself “Cubs Fan Bud Man”.  And he dreamed one day the Chicago Cubs would win the World Series. The city of Chicago has had that dream since 1908! Last night that dream came true with a dramatic Game 7 victory. The only thing missing from last night’s win was Harry Caray calling the final out…until now. 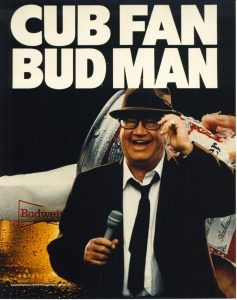 Budweiser, the official beer of Major League Baseball, has created a custom TV spot that allows fans to hear the late, great Harry Caray call the final out of the 2016 World Series by utilizing Caray’s iconic voice over clips depicting the emotion of today’s fans.

To make this a reality, Budweiser custom-created a spot featuring audio from Caray’s days as a Cubs broadcaster overlaid with real-time fan reactions to the game and Chicago Cubs fans celebrating the historic victory. In partnership with the Harry Caray estate, this custom spot was released following Game Seven of the 2016 World Series, giving baseball fans everywhere a chance to hear the final out the way it was meant to be called.

“While Bud and baseball pair well together, nothing and no one is more synonymous with the Chicago Cubs than Harry Caray,” said Ricardo Marques, vice president, Budweiser. “To help Cubs fans celebrate this historic win, we wanted to bring back the real ‘Cubs Fan Bud Man’ to deliver the winning announcement he longed to give. We are honoured to be part of this special moment.”

Additionally, Budweiser reprised and aired its iconic 1984 “Cubs Fan Bud Man” ad (above) immediately following the last out of the Fall Classic, showcasing Caray enjoying a baseball game with his fellow bleacher bums with his favourite beverage at his favourite stadium – Wrigley Field.

The brand’s partnership with Caray dates back to the 1980’s when he first held the role of “Cubs Fan Bud Man”, resulting in a series of Budweiser commercial cameos. The relationship continues to be a strong one, with the brand working closely with the Harry Caray estate to continue to honor Caray and his commitment to baseball.

Budweiser will also be in on the ground in Chicago, with various activations, including:

The impossible is possible. Cheers to the guy we wish had been in the booth tonight. @Cubs, #ThisBudsForYou. #FlyTheW pic.twitter.com/wLCnKCYNnO

Anheuser-Busch and MLB have a longstanding relationship with Budweiser serving as the “Official Beer Sponsor of Major League Baseball” for more than thirty years.

Budweiser’s Ad Pays Homage to One Man Who Should Have Seen the Cubs Win added by Newsroom on November 4, 2016
View all posts by Newsroom →