By Newsroom on July 2, 2018Comments Off on Burger King Celebrates Saudi Women Driving with the WhoppHER

Add another brand celebrating women driving in Saudi Arabia. Burger King is offering a free Whopper sandwich for every woman behind the wheel who goes through its drive-thrus in the kingdom.

The fast-food chain isn’t changing the burger, called the WhoppHER, itself—just the wrapper, with an emphasis on the program’s logo and “Celebrating Our Driving Women” copy in both English and Arabic. 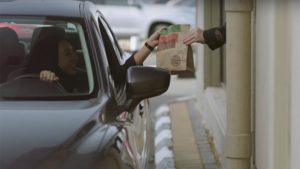 “We congratulate the Saudi women,” said Marcelo Pascoa, global head of brand marketing at Burger King Corporation. “We are happy that once again the brand can derive a benefit to draw attention to relevant matters such as women taking the driver’s seat in Saudi Arabia that represents another step towards social equality.”

Burger King joins Audi and Shell with the high-profile campaign. It isn’t the first time the brand and its agency, David, have supported important moments, issues or causes.

Aside from its award-winning “Whopper Neutrality” campaign, the brand has lent its heft to the LGBTQ community with “Proud Whopper” and even helped its biggest rival, McDonald’s, raise money for a children’s cancer charity in Argentina.

The promotion, which was devised by Grabarz & Partner, is set to run throughout Saudi Arabia until July 24, exactly one month after the law allowing women to drive came into effect.

Burger King Celebrates Saudi Women Driving with the WhoppHER added by Newsroom on July 2, 2018
View all posts by Newsroom →