By Newsroom on July 3, 2015Comments Off on Burger King Goes Skin Deep to Make Its Mark on the Competition

Burger King restaurants in Brazil launched a new integrated campaign to promote the new Big King sandwich. An online film, featuring five Big Mac fanatics from around the world, debuts on the brand’s YouTube channel. The film documents an unprecedented chance and challenge to some of the world’s biggest burger fans, to change allegiance from a main competitor’s signature sandwich to the flame-grilled Big King sandwich.

In the film by creative agency David in Sao Paulo, five individuals from Brazil, Taiwan, the United States, Spain and Italy tell their stories. Each loves the Big Mac sandwich with a feeling so strong that they had it tattooed in a place of prominence. These burger-lovers were invited to travel to Brazil and participate in a real test that might just leave them with an unforgettable mark.

Accepting the challenge, the team was flown to Brazil where the adventure began in a Burger King restaurant in Sao Paulo. Each of the five individuals tried the Big King sandwich and it was love at first bite. But that was only the beginning. After experiencing the great flame-grilled taste of the Big King sandwich, the opportunity for a true transformation presented itself. Ami James, a global icon in the tattoo world and internationally known for his reality show Miami Ink, surprised the group inviting them to get their tattoos retouched to reflect the reason for the great taste of their new favorite burger. 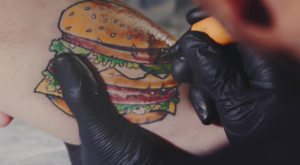 Grill marks were masterfully applied to their burger tattoos turning them from plain patties into flame-grilled Big King sandwich beauties.

“Leaving old habits behind can sometimes bring us pleasant surprises in life, and that’s what we wanted to convey in this Big King campaign. We found out that people are indeed open to change, and they often find that it can bring both something positive and surprising,” said Ariel Grunkraut, Marketing Director for Burger King restaurants in Brazil.

“Sometimes reality surpasses fiction. In literally one month we travelled the world seeking the most fanatical fans of our competitor, to convert them into Big King fanatics. An idea as difficult to accomplish as it was fascinating, ” said Rodrigo Grau, creative vice president of David in Brazil.

The Big King sandwich campaign will launch with the 3-minute film, and will be shortly followed by in-store promotions and social media activations.

Burger King Goes Skin Deep to Make Its Mark on the Competition added by Newsroom on July 3, 2015
View all posts by Newsroom →