By Newsroom on April 19, 2018Comments Off on Burger King Hacks Peruvian Law in Movie Theaters With “King Popcorn” Campaign by McCann Lima

Until March 25th, moviegoers could only consume food and beverages bought in the theater’s food concessions in Peru. Any external purchase was forbidden. After a resolution by the National Institute for the Defense of Free Competition and Protection of Intellectual Property, this prohibition ceased, and consumers can enter movie theaters with good food “similar” to those sold in the cinema’s food concessions. 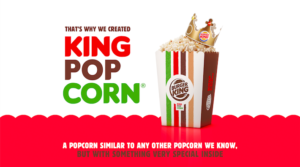 and McCann Lima saw this change in the law as a marketing and communications opportunity and created the “King Popcorn” activation, in which Burger King sold its star product, a Whopper and order of French fries, in a popcorn bag specially designed to disguise additional contents – but identical in appearance to those sold in theaters and thus easy to sneak inside the movie.

Christian Caldwell, Chief Creative Officer at McCann Lima, said: “The idea was to hack a law that’s a little absurd. The King Popcorn, in fact, has only a lid with a small amount of popcorn inside and then a hidden Whopper and fries. This allows consumers to enter the cinema and enjoy their favorite Burger King meal.”

The activation was launched on the same day the new law became effective in shopping centers and cinemas where a Burger King is present in the food court. The campaign was supported by social media and point of sale ads.

Although the move theaters realized the initiative and tried to boycott the action, during the activation period Burger King managed to increase its sales by 40%, putting the brand in the consumer spotlight. 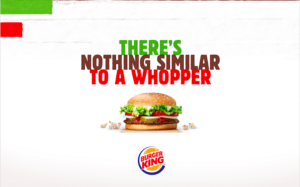