By on July 5, 2016Comments Off on Burts Chips Unveils Two Flavours to Extend Brand Partnerships 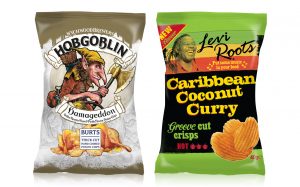 The new flavour is packed in vibrant packaging in line with other products across the Levi Roots portfolio and will carry a “new flavour” flash on the front of pack. Each pack will retail with a recommended price of between £0.79 and £0.99 per 40g bag.

Simon Knight, sales and marketing director for Burts Chips, said: “The popularity of Levi Roots continues to grow. It’s a distinctive brand with a credible spicy flavour and is now expanding into new areas – including a new Levi Roots Caribbean Smokehouse restaurant in Westfield Stratford in East London, proving its fantastic popularity with consumers.

“Our new flavour is genuinely different and has already proved popular in taste panels, showing that shoppers are looking for ways to add hot, spicy flavours to their snacking repertoire.”

Burts will also release a second flavour innovation in partnership with the Wychwood Brewery – part of the Marston’s brewing portfolio. 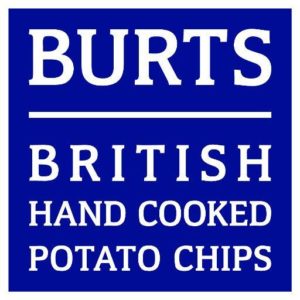 Hobgoblin Burts Hamageddon crisps offer the same premium, hand-cooked quality of other products in the Burts portfolio – made with British potatoes in small batches, they are carefully crafted as the ideal accompaniment to beer and designed to appeal to both men and women. Free from artificial colours, flavours or hydrogenated fat, they too will retail for between £0.79 and £0.99 per 40g bag.

Knight continued: “We’re already seeing great success with the first Burts launch under the Hobgoblin® brand and are expecting this innovative new flavour to appeal to both existing and new consumers. Burts is known for its premium snacks and flavour innovation, while Hobgoblin Gold is considered to be one of the most successful craft beer launches of last year and Marston’s is one of the UK’s fastest growing brewing brands. This winning partnership will drive consumer interest through both the retail and on-trade channels.”

The two launches will be supported by a trade PR and advertising campaign from June to September, including online and print media, a direct email campaign, social media and sampling activity at events across the UK.