By Newsroom on October 19, 2017Comments Off on ButterflyCannon Create Grand Vintage Malt 1990, The First Release From Glenmorangie’s Bondhouse No.1 Collection 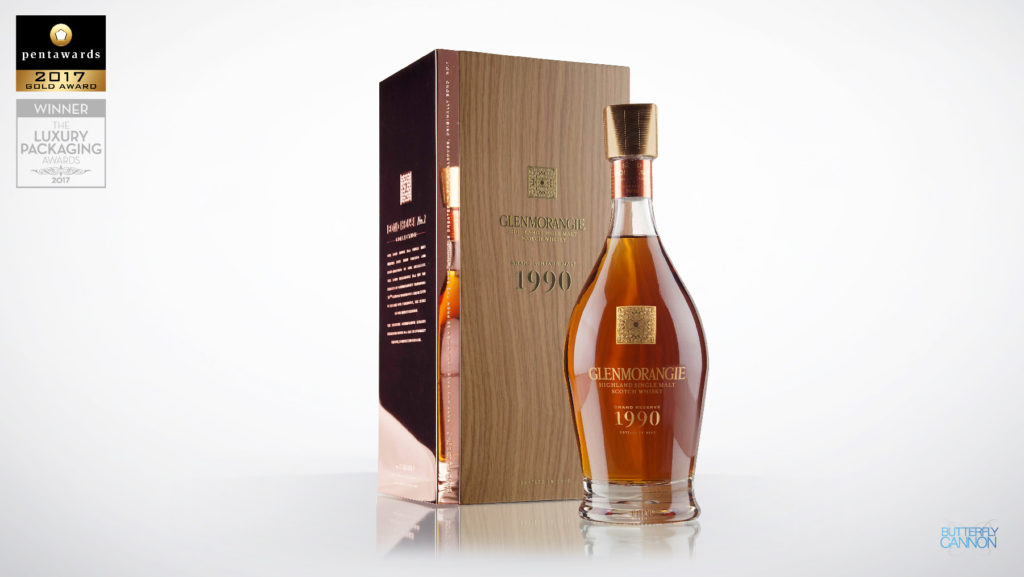 Glenmorangie Grand Vintage Malt 1990, is the first release of Glenmorangie’s new
Bondhouse No.1 Collection; an exclusive series created for connoisseurs and collectors
which explores the origins of Glenmorangie’s most intriguing and prestigious parcels of mature whisky.

We were asked to identify a compelling product story for this 25-year- old Single Malt Scotch Whisky. After searching through the Glenmorangie archives we discovered that this incredible liquid was the first release of spirit that has been distilled in the current still house, converted in 1990 from the former distillery’s Bonded Warehouse No.1. This former Bondhouse was the only building large enough to house Glenmorangie’s majestically tall stills.

Our packaging design for this exceptional liquid reflects the two key aspects of its creation and their relative roles in influencing its unique characterstics. The initial distillation was in Glenmorangie’s uniquely tall copper stills followed by 25 years of maturation in their American white oak casks. These traditional craft materials were given a contemporary twist using clean modern geometric lines and a luxurious soft touch leather style interior. The graphic elements were etched or applied through a metal decal to ensure the design had both visual and tactile beauty.

Since it’s release, the Grand Vintage Malt 1990 has won Gold in both the Luxury Packaging Awards 2017 and Pentawards 2017.

Jon Davies, Creative Director at ButterflyCannon comments, “By bringing to light a story rooted in Glenmorangie’s brand DNA and using traditional, authentic materials in a clean, contemporary way, the team has created an evocative character to the Bondhouse No.1 Collection that allows for the creation of a distinct but coherent range of premium, vintage whiskies moving forward.”

Louise Dennet, Head of Brand at Glenmorangie adds: “By carefully considering how the use of material and form ties into the product story, ButterflyCannon have created a truly luxurious piece of packaging that celebrates both Glenmorangie’s heritage and future at the same time.”

ButterflyCannon Create Grand Vintage Malt 1990, The First Release From Glenmorangie’s Bondhouse No.1 Collection added by Newsroom on October 19, 2017
View all posts by Newsroom →