By Newsroom on September 12, 2014Comments Off on Celebrate Brazil’s National Cachaca Day Like Never Before 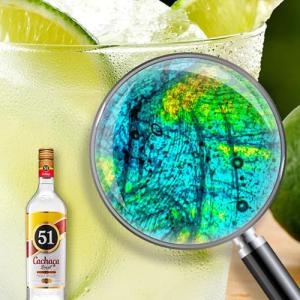 This Saturday, Sept. 13 is National Cachaca Day in Brazil!

But there’s no need to rush to the store for decorations, the celebration is already taking place inside your drink, and everyone’s invited!

Paulo Eduardo Dulla, a creative photographer from Sao Paulo state set out on a mission to capture soul of Cachaca 51 Caipirinha, using a digital camera and a high-tech microscope. What he found was the celebration of Brazilian colors inside the drink.

Under the microscope, a vibrant work of art, featuring a collage of blues, greens and yellows became clear to see.

Click here to view Cachaca 51 Caipirinha under the microscope.

A lot of work was put into finding this microscopic celebration, 25 days to be exact, but relying on the exciting Brazilian taste of Cachaca 51, the team knew there was more behind Cachaca 51 Caipirinha than meets the eye.

“Our purpose with this project was to create the possibility of appreciating the famous Brazilian cocktail in a new way,” Darleize Barbosa, export manager of Cia Muller de Bebidas, said. “Just a bit of curiosity was enough to realize the amazing images we see when we get really close to a Cachaca 51 Caipirinha glass.”

The project, created by Cia Muller de Bebidas, the largest producer of Cachaca in the world, began with a biologist, who froze the Caipirinha to a temperature close to 20 degrees below zero and then crystallized it in a microscope slide.

This allowed Dulla to photograph the brilliant colors inside the Caipirinha DNA that prove the drink is Brazilian to the core.

“Each photo was considered unique,” Dulla said. “We took photos, enlarged them to several sizes, and we discovered in different settings and temperatures a mixture of green, blue and yellow colors which reminded us of our flag and our nature.”

Celebrate Brazil’s National Cachaca Day Like Never Before added by Newsroom on September 12, 2014
View all posts by Newsroom →