By Newsroom on April 17, 2014Comments Off on Children Who Cook Eat More Greens, Nestlé Study Reveals 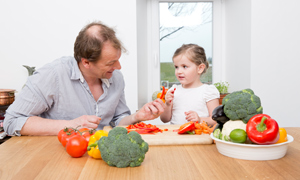 Children who help to prepare their own meals eat significantly more vegetables than those who are not involved in cooking, a Nestlé study published in the journal Appetite suggests.

The research, carried out by the Nestlé Research Center in Lausanne, compared what children chose to eat when they helped cook their own meal with what they consumed when they did not.

“We found that children who were in the kitchen, cooking with a parent, ate more overall of their meal, and a significantly larger amount of vegetables,” said nutritionist Dr Klazine van der Horst, who led the team of scientists who carried out the study.

Making a meal of it

Forty-seven parents, accompanied by a son or daughter aged between six and 10 years of age, were asked to prepare a meal made of various elements, including breaded chicken, salad, cauliflower and pasta.

Half the children in the experiment got involved in making the meal – putting together the salad and helping their parents coat the chicken pieces – while the other children played as their mother or father prepared the meal alone.

The children who cooked alongside a parent ate almost 76% more salad and 27% more chicken as well as consuming 25% more calories overall.

The study also showed that helping to prepare a meal improved how children felt about themselves, with those who cooked feeling more positive emotions and pride. 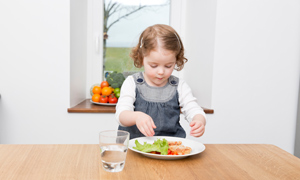 There was also a correlation between the total length of time spent preparing the meal and the time spent eating it, as well as the level of enjoyment expressed, suggesting that children who spend time in the kitchen will also spend longer at the table, and enjoy it more too.

The research showed that in particular the amount of salad consumed increased, perhaps, the scientists suggest, because it was easier for children to independently choose its different elements.

In the future nutritionists would like to study the long-term effects of children cooking with their parents to see how this shapes their consumption patterns and food choices.

Another recent study carried out by Zurich’s ETH University and Nestlé and published in the journal Public Health Nutrition showed that serving school-age children a greater variety of vegetables increased the quantity they chose to consume.

The most recent study was carried out at the Nestlé Research Center (NRC), one of the company’s 34 Research & Development and Product Technology Centres around the world. The NRC’s 250 scientists publish some 200 peer-reviewed scientific publications each year across areas including nutrition and health, public nutrition and food consumer interaction.

Nestlé aims to help parents and children make healthier choices, running cookery schools and educational programmes around the world including in countries like Germany, Thailand, Venezuela and India.

In Germany, the Maggi Kochstudio (Cooking Centre) offers cooking classes to adults and children, teaching them how to best combine Maggi with fresh ingredients to prepare tasty and balanced meals. In 2013 alone, more than 9,400 participants attended these sessions.

Nestlé has also recently published a guide for children and their parents with helpful tips on how to grow their own organic vegetables as part of its global Healthy Kids Programme.