By Newsroom on January 7, 2016Comments Off on Chobani Takes Aim at Other Light Greek Yogurts in New Push

Just in time for diet season, and after two years of sales gains and tweaks, Chobani is ready to shine a spotlight on its light Greek yogurt.

A new campaign debuting January 6, pits Chobani Simply 100 against certain light Greek yogurts from Yoplait and Dannon, calling the rivals out on using artificial ingredients and underscoring Chobani’s use of only natural ingredients. It is the first major marketing push for Simply 100, even though the line launched in 2014.

“We were late to the game on this one. We stand by late for good reason,” said Chobani Chief Marketing Officer Peter McGuinness, who said Yoplait Greek 100 and Dannon Light & Fit Greek were in the market for two to three years before Chobani Simply 100 debuted. “We wanted to develop a light yogurt using only natural ingredients and not using artificial sweeteners and artificial preservatives, among other things.”

Chobani made tweaks to Simply 100 during 2015 such as switching from fruit on the bottom to a blended style and updating the packaging, and sales of the line grew double digits, Mr. McGuinness said. He said Simply 100 also gained shelf space when retailers reset their yogurt sections this month, in part because of two new flavors and the new Simply 100 Crunch, a mix-in that mimics the “sidecar” idea of its growing Chobani Flips line. Now, he is ready for the brand’s marketing debut.

Chobani will invest more in Simply 100 than it ever has, Mr. McGuinness said, calling 2016 “the year of Simply 100.” A 12-week marketing push starting now includes everything from TV commercials and print advertising to coupons and a promotional push at Life Time Fitness gyms.

The campaign plays off the idea that women who buy light Greek yogurt think they are making smart decisions but would not be happy if they knew about some ingredients found in other brands. The push coincides with the busiest season for light yogurt. According to Chobani, one-third of all light yogurt is consumed during the first three months of the year.

Chobani is also calling out Yoplait and Dannon yogurts in a print ad set to appear in a dozen newspapers including The New York Times and People magazine. 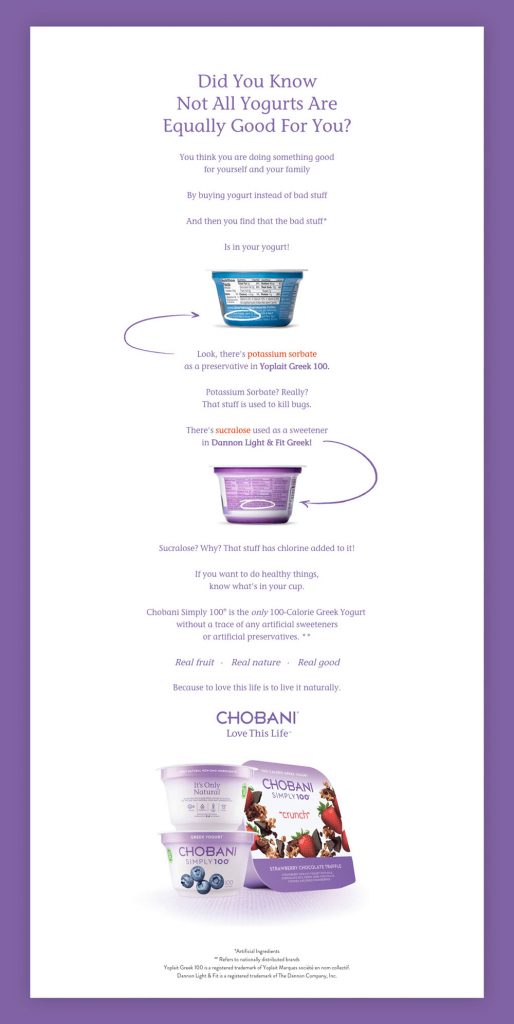 The print ad does not point out the ingredients in Chobani Simply 100, which include evaporated cane juice, pectin, monkfruit extract and stevia leaf extract. But a detailed web site outlines Chobani’s positioning and product lineup.

Comparisons in yogurt advertising are not new. Yoplait and Dannon even compared their products to Chobani in prior years. And before its new campaign launched, Chobani was referring to Simply 100 on its web site as the only 100 calorie Greek yogurt sweetened naturally.

When asked about that website comparison, General Mills said its product is what consumers want. “During the product development for Yoplait Greek 100, consumers tested the yogurt with different sweeteners, and they liked the product with sucralose the best. They also appreciate the fact that there are no artificial colors or flavors,” the company said in a statement.

Dannon, meanwhile, said its Light & Fit Greek has been “very successful,” due in part to its taste, flavour variety and because it contains 80 calories per cup.

“Like many reduced calorie foods, Light & Fit Greek yogurt contains sucralose. Chobani’s suggestion that Light & Fit Greek is unsafe is untrue, irresponsible, misleading to consumers and harmful to our brand. Sucralose is a safe and widely used sweetener in foods and has been for over 15 years,” a Dannon spokesman said.

Dannon’s Oikos Triple Zero yogurt has no artificial sweeteners, but also is not marketed as a light Greek product as it has more than 100 calories per serving.

Chobani said three agencies worked on the Simply 100 campaign: Opperman Weiss, DDCD and Weber Shandwick. Later in the year, Chobani plans to again advertise Flip and then turn its focus to the Olympics, as it is a Team USA sponsor.

Chobani Takes Aim at Other Light Greek Yogurts in New Push added by Newsroom on January 7, 2016
View all posts by Newsroom →