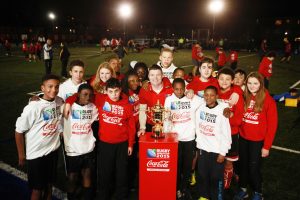 The surprise rugby session took place at The Petchey Academy in Hackney, giving teen rugby players from local amateur club, the Hackney Bulls, and schools across East London the chance learn some new rugby skills from one of the world’s greatest ever players.

The Coca‑Cola Company’s Rugby World Cup 2015 ambassador Brian O’Driscoll, the most capped player in international rugby history (141), said: “I’m really excited to be working with Coca‑Cola for Rugby World Cup 2015 and see this as an opportunity to bring the game to a wider audience. As a former professional sportsman, I’m a passionate believer in the importance of leading an active, healthy lifestyle and understanding the benefits of physical activity. Today’s surprise session was a great way to kick start the partnership between Coca‑Cola and the Rugby World Cup which is all about how the excitement of a global sport event can motivate anyone to move”.

The Hackney Bulls are working to coordinate regular open training sessions like today to encourage more people in the community to take up and enjoy the healthy benefits of rugby and physical activity.

“East London is not an area of the country that is synonymous with rugby. But the Rugby World Cup 2015 is going to bring a whole new audience to our game and I’m excited to be to be working with Coca‑Cola to show fans new and old just how enjoyable and exciting the sport can be,” O’Driscoll continued.

The exciting new partnership for Coca‑Cola continues its rich heritage in the international game and marks almost two decades as a partner of the world’s most iconic rugby event.

As rugby fever begins to grip the host nation and the rest of the world, Coca‑Cola looks forward to celebrating the passion, excitement and happiness of Rugby World Cup 2015 with fans throughout Great Britain. 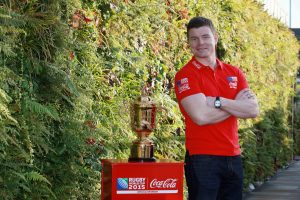 Paul Dwan, General Manger of the Coca‑Cola Rugby World Cup 2015 team said: “Rugby World Cup 2015 looks set to be the biggest ever; we’re delighted to be a part of it to celebrate the excitement and passion the tournament will generate. The game enjoys fantastic support, we saw the tonight with the great turn out from the Hackney Bulls and The Petchey Academy, but we hope that through our sponsorship we can bring rugby to an even wider audience next year.”

Rugby World Cup Limited Chairman, Bernard Lapasset said: “We are delighted to be extending our long and successful partnership with Coca‑Cola as official soft drink. With Rugby experiencing unprecedented growth around the world and Rugby World Cup playing a pivotal role in inspiring future fans and players, we are delighted to be working with a brand that shares our passion for the sport and its character-building values.”

World Rugby Head of Commercial, Broadcast and Marketing, Murray Barnett added: “The Coca‑Cola Company is a long term partner of World Rugby. It is a testament to the strength of Rugby World Cup, and rugby as a sport, that Coca‑Cola is continuing to support the tournament in 2015.”

Coca‑Cola has had a long standing association with rugby from an international level through to grassroots. Since first sponsoring Rugby World Cup 1995 in South Africa, Coca‑Cola has featured at every tournament as well as supporting various local rugby initiatives around the world.

For Rugby World Cup 2015, Coca‑Cola will hydrate fans, players, teams and officials at the tournament and provide exciting rugby opportunities that celebrate the passion, excitement and movement of rugby around the world.