By Newsroom on January 28, 2014Comments Off on Coca-Cola Reunites Migrant Workers & Their Families For Chinese New Year

With Chinese New Year fast approaching, millions of Chinese migrant workers will be making the long trek from the city back to their homes in the rural provinces.

These migrant workers leave behind their families, often with one or more young children, in order to work in cities and factory towns. According to the All-China Women’s Federation, an estimated 61 million children are separated from their parents; they often live with relatives in the countryside and only see their parents during the festive season. 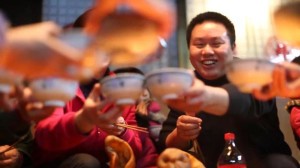 Coca-Cola’s new documentary highlights the millions of children who endure months of separation from their parents. In the four-minute-long video produced by McCann Shanghai, we are introduced to three families, bearing witness to the sadness both parents and children feel at being apart. One little girl muses wistfully about her mom being unable to recognize her as she has been away working for a long time, while her mother reveals she and her husband cried every night from the pain of being apart from their twin girls.

Tender and heartwarming, the video struck a chord with viewers as it features real people and their stories. It was shared on social media and screened in taxis, generating discussion about China’s ‘left-behind children’ and prompting viewers to share their own regrets about being away from their families.

Richard Cotton, Director of content and creative excellence for Coca-Cola China said, “We wanted to touch on something real, not manufactured, and we found a great cast and had some discussions when we were casting for them.”

For the three families who were reunited, this year’s holiday was extra sweet as the soft drink company brought them home a few weeks early–filming was completed in early January. Throughout the spot, the message that Coca-Cola sends is clear: it connects people and brings them together, and the looks of joy and happiness on the faces of the families at the end say it all.

Coca-Cola Reunites Migrant Workers & Their Families For Chinese New Year added by Newsroom on January 28, 2014
View all posts by Newsroom →