By Newsroom on January 13, 2016Comments Off on Coca-Cola’s Teen Dance Program “Share the Movimiento” Returns

It’s time to shine up those dancing shoes because Coca-Cola’s Share the Movimiento dance program is back in South Florida. Share the Movimiento provides teens a chance to work together as a team and express themselves through dance while getting involved with the community. This year kicks-off the second annual event that invites teens to move and groove their way toward the $5,000 first prize that makes a difference in something they’re truly passionate about in their community.

“Share the Movimiento helps teens to pursue their passions through dance and it also gives them an opportunity to give back to their local community – whether that is in the form of new uniforms for their school dance team, new gym lockers or bleachers,” says Valerie Alva Ruiz, Manager, Public Affairs and Communications, Coca-Cola North America. “It’s rewarding to see teens so motivated by this program. They know they are helping make a positive difference and impact.” 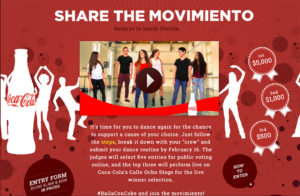 Beginning January 12, participants ages 14 through 19 are encouraged to assemble a “dance crew” of two to six members and submit a video of their routine, featuring the signature dance move and program’s official theme song, “Take Me Away,” by Robby Cam.

Visit here to learn more, get complete competition guidelines and submit an entry by February 16.

Of the video entries submitted, five semifinalists will make the cut and the public will vote on their favorites with the top three fan-favorite dance crews will have the opportunity to perform live on the Coca-Cola stage at Miami’s Calle Ocho Festival on March 13 in front of returning judges Nick Garcia, So You Think You Can Dance (Season 11) contestant, and Mack from Y100’s Mack with Nina and Nick, alongside Kassandra Montadon, Miss Carnaval Miami 2015.

The judges will award first ($5,000), second ($1,000) and third place ($500) prizes. The prize money will be awarded to the winning teams’ charity, organization or school to support their cause.

“Share the Movimiento brings Miami’s youth together to raise awareness of important community causes and self-expression through passion and the arts!” said retuning judge, Nick Garcia. “Thanks to Coca-Cola, in just one short year this program has made a positive impact in my hometown.”