By Newsroom on February 9, 2017Comments Off on Collaboration Between Tim Tam and Gelato Messina Sparks Mayhem 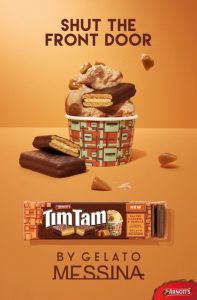 Arnott’s Tim Tam has created a new campaign via creative agency TKT Sydney, that playfully embraces the hyperbole and mania surrounding its latest collaboration with the demigods of dessert, Gelato Messina.

The campaign and visual treatment is intended to deliver news so fist-pumpingly-all-the-exclamation-points-combined-amazing, the public will literally be crippled with excitement.

The new work, which aims to generate social conversation and word-of-mouth recommendations, comprises nationwide OOH in Australia, a bespoke Snapchat lens and an ongoing editorial partnership with the Daily Mail Australia.

The significant partnership with Sydney’s Messina is the second chef-inspired range from Tim Tam, having previously worked with Adriano Zumbo. 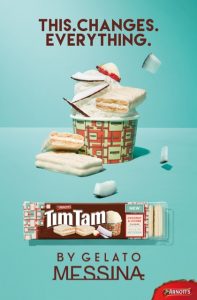 According to Tim Tam marketing manager, Claire Kesby-Smith, the launch of a new product is not only intended to drive sales, but to renew brand love through PR and social activity.

Kesby-Smith said: “This new generation of Tim Tam is one of our most exciting and innovative yet. Gelato Messina is leading the way in the Aussie gelato movement, and we’re thrilled to pair their expertise with Australia’s most-loved chocolate biscuit. To stay relevant, it’s crucial that iconic brands like Tim Tam continue to reinvent themselves through trend-driven innovations and partnerships.” 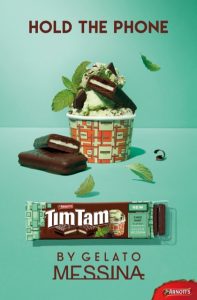 To herald the arrival of the new range, Sydney’s food scene gathered at Messina’s HQ in Rosebery last week to attend a launch event attended by Katherine Sabbath and Anna Polyvou. Early reaction to the campaign has been strong, with reactions on social media reflecting the tone of language used in the campaign imagery.

In creating the new range, Tim Tam took the culinary team from Messina into the secret kitchens of its famed bakeries and taught the gelato chefs the art and science of Australia’s favourite biscuits.

Declan Lee, co-founder, Gelato Messina said: “When Arnott’s approached us about creating gelato-inspired Tim Tam flavours, it was pretty exciting and quite a privilege. It was a new challenge for us – making gelato is one thing – and making a biscuit that tastes like that gelato is another.” 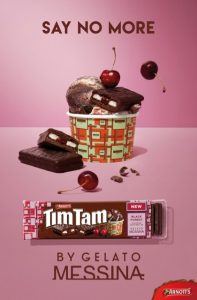 Collaboration Between Tim Tam and Gelato Messina Sparks Mayhem added by Newsroom on February 9, 2017
View all posts by Newsroom →