By Newsroom on January 24, 2014Comments Off on Coors Light Encourages Sports Fans to Celebrate the Cold with Epic Giveaway

Amid record-low temperatures nationwide and chatter about the weather conditions in the northeast over the next two weeks, Coors Light not only is welcoming the cold, it’s embracing the “Super Cold” with a week-long Facebook giveaway and a series of exciting events.

The beer that delivers “refreshment as cold as the Rockies” to legal-drinking-age consumers in Super Cold Activated bottles and cans and is the best-selling beer in New York is starting “Super Cold Week” January 26, the day of the first of two Coors Light NHL Stadium Series games in the Bronx. 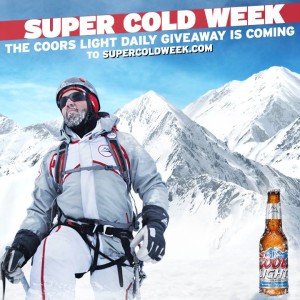 The celebration includes the Coors Light #SuperColdWeek Giveaway, a week-long Facebook giveaway that starts January 26 and continues through February 2. This weather-based giveaway, linking to the 34-degree temperature at which Coors Light is frost-brewed, will give people across the country a reason to get excited about the weather in New York. At any point during #SuperColdWeek, if consumers see blue mountains on a Coors Light bottle or can in a photo on the brand’s Facebook page and a giveaway is announced, they could receive a beer gift.

“Coors Light was born in the Rockies and is frost-brewed at 34 degrees, so we understand it takes a special mindset to truly embrace the cold,” said Tristi Pfeiffer, Coors Light director of marketing. “Others can spend their time worrying about whether it will be too cold in New York. We’d rather celebrate the fans who recognize that a touch of cold makes life more enjoyable, whether it comes in your favorite beer or while watching your favorite team.” 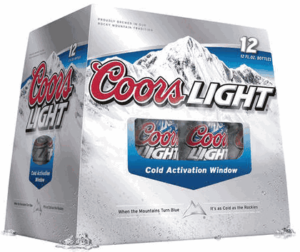 With up to $250,000 worth of Coors Light gift cards being shared as part of the #SuperColdWeek Giveaway, there are plenty of chances to get rewarded. Legal-drinking-age consumers simply need to closely watch the brand’s page on each of the eight days of #SuperColdWeek for photos showing the blue mountains and an announcement of the giveaway. Photos could be posted at any time; when a photo is posted, the first 1,250 people to register by clicking the link get a $25 Coors Light gift card to buy beer.

Punctuating the second half of #SuperColdWeek will be a special concert featuring a performance by Grammy-nominated country music star Jason Aldean and a DJ set by Questlove, the legendary Roots drummer. This ticketed event will take place January 31 at Irving Plaza in New York City.

Coors Light Encourages Sports Fans to Celebrate the Cold with Epic Giveaway added by Newsroom on January 24, 2014
View all posts by Newsroom →