By Newsroom on November 21, 2012Comments Off on COSTA BOOK AWARDS 2012: SHORTLISTS ANNOUNCED

Costa today announces the shortlists for the 2012 Costa Book Awards.

The Costa Book Awards recognise the most enjoyable books in five categories – First Novel, Novel, Biography, Poetry and Children’s Book – published in the last year by writers based in theUKandIreland.

Originally established in 1971 by Whitbread Plc, Costa announced its takeover of the sponsorship of the UK’s most prestigious book prize in 2006. 2012 marks the 41st year of the Book Awards.

To be eligible for the 2012 Costa Book Awards, books must have been first published in the UK or Ireland between 1 November 2011 and 31 October 2012. 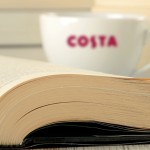