By Newsroom on October 4, 2012Comments Off on COSTA GIVES FANS THE CHANCE TO APPEAR IN ITS NEW ADVERT

Costa Coffee is giving its fans the chance to star in its latest TV advert – and show off their singing talent.

Costa’s latest advert, airing at 9pm on Channel 4 this Friday 5th October, brings to life the pride and passion that Costa baristas have for the coffee they make and the customers they serve. In it, dozens of men and women, including genuine Costa baristas, are seen buried up to their necks in a sea of coffee beans, covering the KISS hit song I Was Made For Loving You.

However, for its final advert slot on Friday 26th October, Costa will make its customers the stars. An app launches this week that will allow Costa fans to record and upload themselves singing along to the Kiss song, with winning performances featuring in the final ad.

The app, available via the Costa Facebook page, or through the App Store on iTunes, means fans and baristas can join in and share with their friends.

Kevin Hydes, Marketing Director of Costa Retail, said: “Until now, our fans could only tell us how much they love Costa by posting messages on Facebook. Now they can show us – by singing at the top of their lungs to one of the greatest rock songs ever.

“On a more serious note, the idea of this is that by putting Costa fans together with our baristas, it playfully makes the point that they really are the stars and it’s only right they feature in our TV ad. It’s all about showing that our baristas put their heart into everything they do, and we hope our customers feel the love in every cup.” 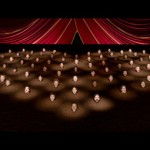 COSTA GIVES FANS THE CHANCE TO APPEAR IN ITS NEW ADVERT added by Newsroom on October 4, 2012
View all posts by Newsroom →