By Newsroom on January 2, 2015Comments Off on Crabbie’s Launch ‘Refreshingly Adventurous’ Multi-Platform Campaign 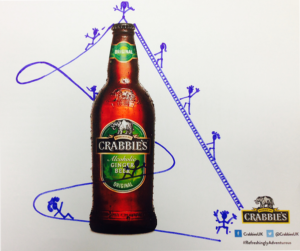 Crabbie’s Alcoholic Ginger Beer recently kicked off a campaign across radio, outdoor, PR, social media and trade press based on the ideas from four up and coming artists.

The artists were tasked with creating and developing concepts of what they saw as ‘Refreshingly Adventurous’ and featuring the Crabbie’s bottle in different guises. 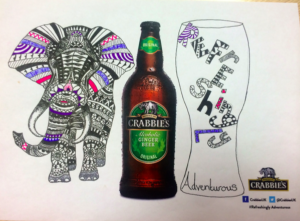 Some of the artwork has been rolled out across smart screens, digital tube panels, 48 and 96 sheets and city centre screens.

Ahead of Christmas, Crabbie’s kicked off a radio campaign featuring three 40 second versions voiced by BBC Radio 6 Music DJ, Sean Keaveney. The activity centred on a competition which asked consumers to send in their ‘refreshingly adventurous’ plans for Christmas.

In addition, a ‘Crabbie’s Time’ app was also launched, which featured presents and prizes to be won every day throughout December. 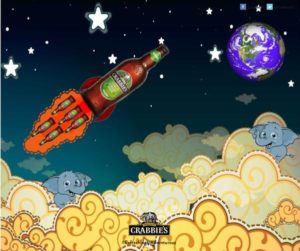 “The Crabbie’s range provides consumers with an exciting mix flavours and tastes, and we wanted to communicate to a different audience through our new creative. This campaign not only inspires, but it also excites and entertains consumers, engaging with them in more adventurous ways consequently spending more time with the Crabbie’s brand. Our aim was to create brand advocacy. Crabbie’s are not only famous for producing Refreshingly Adventurous drinks, but for communicating to consumers through new innovative adventurous ways.”