By Newsroom on December 11, 2015Comments Off on Crabbie’s Light Beats Major Tim Peake to Become First Ginger in Space

In a battle akin to the space race between cold war rivals USA and USSR, the UK’s best-selling alcoholic Ginger Beer, Crabbie’s has dealt a huge blow to ‘Gingeraught’ Major Tim Peake’s claim to become the first ‘ginger’ in space.

In the oddest of missions that even the most experienced at NASA can’t say they’ve witnessed, Crabbie’s this week launched a bottle of its latest product, Crabbie’s Light, into space as part of its mission to win the ‘Ginger Space Race’.

Mirroring Tim’s rigorous training, the bottle of Crabbie’s Light was subjected to a range of stress tests, including extreme freezing conditions, before heading to the top secret launch site near the Welsh boarders, the UK’s well known home of space exploration. 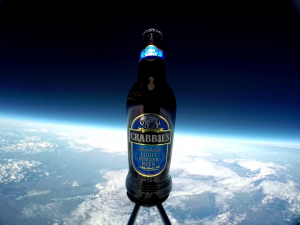 Blasting off at 11am on the 8th December, the mission was a complete success, with the bottle performing a number of complex moves before safely returning to earth to rapturous applause/mooing from a nearby heard of cows.

The Crabbie’s Light bottle, successfully hit the edge of the earth’s atmosphere at around 11.48am to stake its claim to being the first ginger in space, piping Major Tim to the post by a whole six days.

Speaking about this momentous achievement Claire Kelly, Head of Mission Control at Crabbie’s, commented, “This space challenge was in true essence of the Crabbie’s Light adventurous spirit and brings a whole new meaning to ‘product launch’. We would like to wish Tim Peake all the best in his space travels, sending our sincere apologies for stealing his thunder by becoming the first true ginger in space.”

Crabbie’s Light Ginger Beer contains half the ginger of Crabbie’s Original Alcoholic Ginger Beer, providing a more versatile liquid either consumed chilled, straight from the bottle with a wedge of lime, or as a mixer substitute when paired with Whisky, Rum, Gin or Vodka.

Fermented for six weeks and with ABV of 2.8%, Crabbie’s Light will be available in 330ml and 500ml bottles.