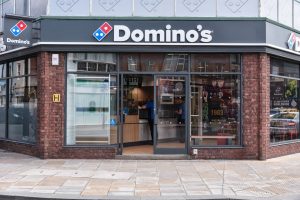 Domino Pizza’s broad ranging marketing activities have helped the company strengthen its position in the increasingly competitive UK fast food delivery market with strong annual results that will facilitate the opening of an additional 400 new stores.

As part of its strategy to hold off competition from the likes of Deliveroo and UberEats, Domino’s recently told investors at its capital markets day that it has upped its target for UK stores by a third to 1,600, up from 1,200 outlets previously.

The expansion follows on from an array of innovative tech-centric experiments in its marketing campaigns this year, including a specially equipped delivery car with on-board cooker, an autonomous delivery robot, drone deliveries, a Facebook Messenger bot and a Facebook Live auction.

The stunts have helped the company significantly increase its online orders which have contributed to an 11.5% overall sales growth on last year to £237m, from £212.6m.

Last month it reported that 81% of its deliveries in the year to date were ordered online with 64% of purchases placed through its app or mobile site. The figures represent an 18% jump in online orders in the third quarter compared to 2015.

Outside the UK, Domino’s plans to open 400 stores in new markets including Iceland, Norway and Sweden as part of its international drive which is due to start before the end of the year.