By Newsroom on November 2, 2012Comments Off on Doritos Brand Issues Last Call for Consumers to Create Super Bowl Ads

The Doritos brand today announced a last call for entries in this year’s “Crash the Super Bowl” contest. Fans have two weeks remaining to turn their boldest Doritos commercial ideas into homemade ads before contest submissions officially close on Nov. 16, 2012. As part of this year’s competition, two finalist consumer-created spots ultimately will air during the Super Bowl broadcast. The finalist whose ad scores highest on the USA TODAY Ad Meter rankings will be awarded the career-changing opportunity to work with acclaimed director Michael Bay on the next installment of the “Transformers” movie franchise, along with a shot at a $1 million bonus. From Paramount Pictures and Hasbro, the next installment in the hit “Transformers” series will be released on June 27, 2014. The Super Bowl XLVII broadcast is set for Sunday, Feb. 3, 2013, on CBS.

As one of Hollywood’s boldest and most bankable feature film directors, Bay’s repertoire includes such blockbuster hits as the “Transformers” franchise, “Armageddon,” “Pearl Harbor,” “Bad Boys” and “The Rock.” Bay’s films combined have grossed $5.4 billion in worldwide ticket sales, and his most recent hit, “Transformers: Dark of the Moon,” ranks as the fifth-highest grossing movie of all time, earning $1.2 billion at the box office. Bay began his career as a creative force in the advertising world, winning many of the industry’s top accolades, including being honored as “Commercial Director of the Year” by the Directors Guild of America at the young age of 27.

Fans can submit their homemade Doritos ads on the new Crash the Super Bowl-branded app on the Doritos Facebook Page (www.facebook.com/DoritosUSA), which is designed to engage and socialize with consumers in a much broader way than ever before. The app features a “help make an ad” collaboration tool, allowing fans from all walks of life to interact with each other and assist with the creation of Crash the Super Bowl entries by requesting or offering up props, talent and other items contestants need to create their potentially winning ads. Now, anyone from any background can play a role in the creation of the next great Doritos masterpiece. The app also houses the traditional toolbox where Doritos logos, product shots, music and animations are available for download and use, as well as the gallery of all contest submissions where fans can view submissions and weigh in on their personal favorites.

Five finalist ads will be announced in January 2013, with two finalist consumer-created spots ultimately airing during the Super Bowl broadcast. One of those ads will be selected by America’s votes; the other by the Doritos brand team. Each of the five finalists will win $25,000 and a trip to New Orleans to attend Super Bowl XLVII in a private luxury suite at the game, where they will tune in to learn for the first time which consumer ads will compete for the top spot in the USA TODAY Ad Meter before a worldwide audience. Bonus prizing will be awarded, based on how each ad ranks on the USA TODAY Ad Meter:

$1 million will be awarded for an ad that scores the No. 1 spot on the USA TODAY Ad Meter 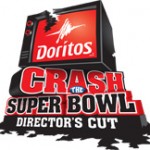