By Newsroom on June 12, 2018Comments Off on Doritos Dinosaurs Stampede the Streets of Sydney in New Guerilla Campaign 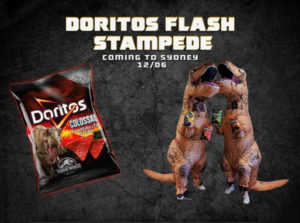 To celebrate the launch of its new lava-coloured Chargrilled Steak flavoured ‘Colossal’ corn chips, Doritos is directing a four-day guerrilla campaign via PHD, championing its recent partnership with Universal Studios.

In the lead up to the release of Jurassic World: The Fallen Kingdom, a pack of 30 Doritos Colossal Dinosaurs will stomp across the Sydney CBD, wrangled by a Chris Pratt look-alike tempting them with Doritos Colossal chips.

In true Doritos ‘Bold & Fun’ style, Doritos and PHD will commission the social and friendly dinosaurs to disrupt Sydney’s busiest areas. The gentle giants will also be popping into media outlets making themselves available for insta-worthy selfies, armed with new Doritos Colossal corn chips for people to try. This display of brand symbiosis will be sure to attract attention to Doritos and the Jurassic World franchise alike for days one and two of the campaign.

As the dinosaurs continue roaming Sydney streets in the following two days, the Doritos’ and Daily Mail’s ‘Roar & Score’ competition will give the public a chance to WIN cold card cash through various on the spot competitions. The Stampede and ‘Roar and Score’ competition will be promoted on the Daily Mail’s Facebook page & Snapchat channel throughout the week to drive awareness of, and scale to the activation to ensure Doritos, Jurassic World, and Daily Mail are the trending conversation of the week. 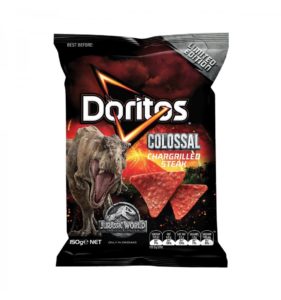 Doritos and Universal Studios will also celebrate their partnership on the day of Jurassic World: The Fallen Kingdom’s release on June 21, by giving away ten inflatable dinosaur suits and limited edition bags of Doritos Colossal Chargrilled flavoured chips through a skill-based competition housed on the Doritos Facebook page.

Alison Silver, brand manager, Doritos said: “We know our consumers are always on the lookout for new flavour sensations, so it made perfect sense for us to pair up with our friends at Universal Studios and create something bold and exciting from both a product and activation perspective.”

Stephanie Douglas Neal, executive director, PHD added: “This campaign is another great example of the boldness of Doritos as a brand, it’s fun and unmissable, we have many PHD’ers taking to the streets in the costumes and everyone here is extremely excited about the execution.”

The campaign will launch today and progress to 15 June. Jurassic World: the Fallen Kingdom is in cinemas 21 June.

Doritos Dinosaurs Stampede the Streets of Sydney in New Guerilla Campaign added by Newsroom on June 12, 2018
View all posts by Newsroom →