By Newsroom on February 8, 2016Comments Off on Doritos Name Winner of Final “Crash the Super Bowl” Contest

It took three cleverly acrobatic dogs disguised as a person — make that a very tall person with a tail — to make the very last “Crash the Super Bowl” contest among the most memorable. 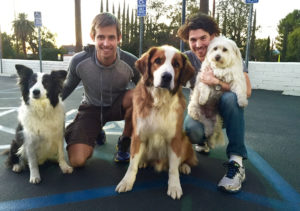 After amassing the most fan votes on www.doritos.com, Los Angeles native Jacob Chase, the creator of the instant classic “Doritos Dogs,” saw his ad air for an audience of more than 100 million during Super Bowl 50 broadcast, earning a No. 4 ranking on the USA TODAY Ad Meter.

For his achievement, Chase was awarded 2016’s “Crash the Super Bowl” grand prize: $1 million and a dream-come-true chance to collaborate with director Zack Snyder while working with Warner Bros. Pictures and DC Entertainment. Snyder is the director of the much-anticipated action film, “Batman v Superman: Dawn of Justice,” set for release March 25, 2016. The film marks the first time the two iconic Super Heroes will share the big screen.

If happiness is a cute puppy, then this ad’s three celebrity dogs — shoulder on shoulder — scored the rough equivalent of the Super Bowl blue ribbon. Chase, the 29-year-old television writer who spent the majority of his youth acting in various theatrical and broadcast productions, featured his own small, white rescue dog, “Misery,” (along with some dogs of some friends) in the spot. 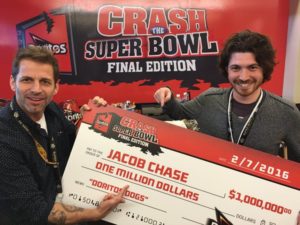 He says he hopes to use the pot of money — and the big Hollywood gig — to pay off student loans and underwrite his dream of filming his ownHollywood movie.

“These are all rescue dogs that once lived in terrible circumstances,” says Chase. “Now they’re living the American Dream — they’re on the Super Bowl.”

For Chase and his girlfriend — both dog lovers who know first-hand how difficult it can be to bring their dog along with them into a store — the commercial represented an opportunity for some savvy dogs to turn the tables on people. “The best thing of all is that the dogs we love most, we got to see in a Super Bowl commercial,” he boasts. What’s more, he adds, “The dogs got to see themselves on the Super Bowl, too.”

“Doritos Dogs” was filmed at a neighborhood grocery store about 90 minutes from Los Angeles. It was shot in one day for about $1,000.

In an unexpected move, the Doritos brand celebrated the 10th and final edition of “Crash the Super Bowl” by airing a second consumer-created finalist spot in Sunday’s Super Bowl 50 broadcast.

“Ultrasound,” created by Peter Carstairs placed No. 3 in the USATODAY Ad Meter rankings. Both Carstairs and second runner-up, David Rudy who created “Swipe for Doritos” each will receive $100,000 and the chance to work on a future Doritos project.

The three finalists were selected by an experienced, qualified panel of judges, including executives from the Doritos brand and top advertising and marketing professionals. 2016’s contest attracted nearly 4,500 ads submissions from 28 countries globally.

All three finalists attended Super Bowl 50 in the San Francisco Bay Area where they watched the game and saw — at the same time as the rest of the world — the ads as they aired.

Doritos Name Winner of Final “Crash the Super Bowl” Contest added by Newsroom on February 8, 2016
View all posts by Newsroom →