By Newsroom on July 10, 2014Comments Off on Doublemint Celebrates 100 Years Of Creating Connections 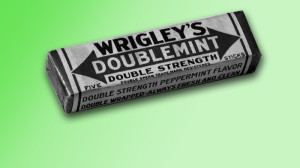 Doublemint was first introduced in 1914, a year full of historic news including the start of the First World War, Charlie Chaplin’s film debut and Henry Ford’s launch of the T-Ford car. It joined Wrigley’s Spearmint and Juicy Fruit as the third brand in the Wrigley portfolio.

Doublemint was the first peppermint gum that had double strength, was double wrapped, and by the 1920s was double-distilled using a peppermint-processing method that created a sweeter and smoother taste.

From the beginning, Doublemint packaging featured dual arrows (that still remain on-pack today), and became one of the best-known brands in the United States when Otis Shepard’s iconic hand-drawn Twins became the lookalike face of the product from 1939–1941. In total, 65 pairs of twins have featured in advertisements over the last 100 years and were used in adverts until the 1990’s.

Fast forward to today; Doublemint is sold in more than 140 countries worldwide, recently launching in Nigeria. Doublemint is expected to become an “icon of connections,” as the brand continues expanding into new geographies.

Doublemint is an intrinsic part of Mars’ heritage as one of the original brands and it continues to support Wrigley’s vision of ‘Creating Simple Pleasures to brighten everyone’s day.’

Doublemint Celebrates 100 Years Of Creating Connections added by Newsroom on July 10, 2014
View all posts by Newsroom →