By Newsroom on April 29, 2014Comments Off on Duff Goldman Launches Cake-In-A-Jar At Duff’s Cakemix In Los Angeles 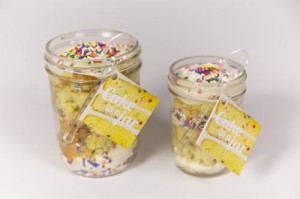 Celebrity chef and television personality, Duff Goldman, announces the launch of his signature Cake-In-A-Jar, which is decadent layers of the beloved chef’s buttercream cake hand-packaged in a colorful glass mason jar. Each jar shipment comes equipped with a personalized note from the chef himself. Straight from the Ace of Cake star’s Los Angeles interactive design bakery Duff’s Cakemix, Cake-In-A-Jar is available in a variety of tongue tantalizing flavors for shipping nationwide. Cake lovers across the country now have the opportunity to dig-in to a slice of Duff’s buttercream cake that is made from his kitchen and sent directly to their doorstep.

“The concept of my Cake-In-A-Jar is simple—I took some of my most beloved cake flavors and packaged them into a jar. I knew there had to be an easier way to eat a delicious slice of cake if you are on the go,” says Duff Goldman, founder of Duff’s Cakemix. “The bakery is such an integral part of Duff’s Cakemix and I wanted to share some of my cake creations with customers nationwide.”

The 2,400-square-foot bakery located on Melrose Avenue next door to Charm City Cakes West, the Los Angeles outpost of his Baltimore location, is most commonly known for its DIY cake and cupcake decorating experiences that are admired by celebrities and dessert lovers alike. Duff’s Cakemix bakery and cafe offers cakes, cake slices, cupcakes and other assorted freshly baked desserts. With Cake-In-A-Jar now available on DuffsCakemix.com, the chef plans to expand the brand’s e-commerce channel in 2015.

Duff’s Cake-In-A-Jar is now available to purchase in the Los Angeles bakery for $5 for a small jar (8 oz.) and $8 for a large Jar (16 oz.). For customers near and far from the beloved interactive bakery, they can order both the small and large jars in increments of two, four, and six which start at $14 on DuffsCakemix.com. Shipping prices are not inclusive and begin at $12 depending on the delivery location.

Duff Goldman Launches Cake-In-A-Jar At Duff’s Cakemix In Los Angeles added by Newsroom on April 29, 2014
View all posts by Newsroom →