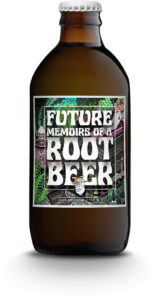 After the successful launch of two category-breaking products in the form of Lick Pier Ginger Beer and Fog City Red Sangria, the team at East 9th Brewing is about to drop your next favourite drink that only the future you has tried.

Yet another outlandish brand developed by creative-everywhere-man Josh Lefers and the team at East 9th, Future Memoirs Of A Root Beer sets the scene of a retrospective window into the future with a glimpse of all the outrageous, awesome things you’ve already done in your upcoming destiny… the memoirs you’ve already told your unborn kids about.

East 9th Brewing have become masters in creating brands that intrigue the industry by inspiring aspiration, ideology and a philosophical way to live. This time the East 9th Team has looked abroad to London-based artist Cei Willis (of Vice mag fame) to develop a psychedelic label that is fully immersed in the history of your future, along with Nell Archer- The Psychic Soul Gazer to join us on the journey as we connect to our future selves…

Alcoholic Root Beer has been earmarked as the next big thing in alcohol. In the US, countless brands have hit the market in an effort to secure their slice of what’s already shaping up to be a multi-million dollar category (over $111 million USD so far in 2015, according to IRI Worldwide research, with the brand ‘Not Your Father’s Root Beer’ the clear category leader).