By Newsroom on September 3, 2015Comments Off on ‘Edible Cinema’ Creates Whimsical Dishes that Correspond to Scenes of the Films

Going to the movies can now be a greater treat for the senses with ‘Edible Cinema’.

The Soho House and Teatime Production collaboration allows audiences to see and “taste the film”, by having tasting menus that correspond to scenes in the movie.

Each audience member is provided with a tray of numbered containers, which contains a bite-sized serving of food or drink. These are consumed when instructed throughout the movie. 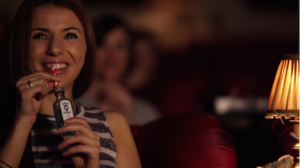 Edible Cinema works together with experimental chefs Blanch & Shock to create interesting dishes that would relate to the environment, words, and overall feelings of a specific scene.

For example, a screening of Pan’s Labyrinth had audiences eating ‘Pine Smoked Popcorn’ during a scene where characters ran through a pine forest. This recreated the pine aroma of the forest, along with the ‘crunch’ of their footsteps.

The next installment of Edible Cinema will feature Tim Burton’s Charlie and the Chocolate Factory—some delights on the menu include a gum that tastes like a three course dinner, and Augustus-flavored chocolate-covered Goop.

However, the tickets are sold out, but you can visit their website for updates.

‘Edible Cinema’ Creates Whimsical Dishes that Correspond to Scenes of the Films added by Newsroom on September 3, 2015
View all posts by Newsroom →