By Newsroom on September 25, 2014Comments Off on Europe Storms to Victory at Johnnie Walker Ryder Cup Media Event 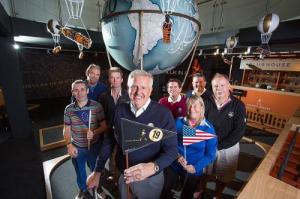 Inside the luxurious Johnnie Walker Experience, a short walk from the PGA Centenary Course where the main action will take place this weekend, a team of European golf journalists sealed a two-shot victory over their American rivals at the exclusive Johnnie Walker Mini Golf Course.

Winning captain, golf pundit and former Ryder Cup captain, Colin Montgomerie said: “I was impressed with the efforts of both teams. I thought the Americans put up a great fight but some clinical putting saw us home on what were very tricky conditions. Will today’s result be an omen for who will win this weekend? Only time will tell.” 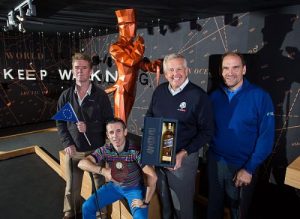 Fans of whisky and golf who are attending this year’s event can book a tee-off time at the Johnnie Walker Mini Golf Course by signing up here. Players will receive score-cards and make their way around the course, while discovering fascinating facts about the brand’s history, before enjoying a ‘Free Drop’ at the bar when they have completed their round.

The Johnnie Walker Experience is an exclusive pop-up installation where players, media and guests can have fun and enjoy a sample of Johnnie & Ginger as the drama of The Ryder Cup unfolds a short walk away.

It is part of a series of exciting activities by Johnnie Walker including an ambitious plan to get 25,000 people to ‘Join the Pact’ during Ryder Cup week by challenging them to make a commitment to Never Drink and Drive. Johnnie Walker Responsible Drinking Ambassador and two-time former F1 Champion Mika Häkkinen will lead the campaign and will be at the event to show his support and encourage fans to sign-up. 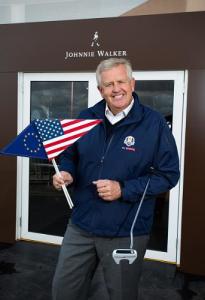 Commenting on the outcome of the media event, Guy Escolme, Global Brand Director, Johnnie Walker, said: “The Ryder Cup is one of the greatest occasions in the sporting calendar with a global television audience of over 500 million, but we won’t know until Sunday evening if what happened here has any bearing on the final result. ‘Paul The Octopus’ did pretty well in predicting results at the 2010 World Cup and who is to say events at the Johnnie Walker Mini Golf Course won’t anticipate Sunday’s result? We’re excited to find out.”

The four holes of the Johnnie Walker Mini Golf Course are: The Grocery Store; The Four Corners; Scotland‘s Finest Exports and Keep Walking.

The Grocery Store is inspired by the brand’s founder, John Walker, who operated out of a grocery store in Kilmarnock in the 1800s, about 65 miles from Gleneagles. He imported rare and exotic flavours from around the world and it is thought that he used his tea blending skills to craft some of the first (and finest) blended whiskies in Scotland.

The Four Corners tells the story of how John Walker & Sons crossed oceans and continents to export their whiskies from the four corners of Scotland to the four corners of the world. Scotland‘s Finest Exports celebrates the fact that whisky and golf are two of Scotland’s greatest gifts to the world and Keep Walking references the Striding Man logo and the brand’s pioneering spirit.

The Johnnie Walker Experience will be open to guests for the duration of The Ryder Cup 2014.