By Newsroom on October 1, 2014Comments Off on evian & KENZO Partner To Release 2015 Limited Edition Bottle 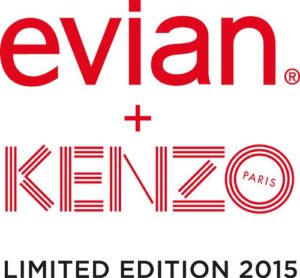 This year, evian and French fashion house KENZO collaborated to design the 2015 evian Limited Edition bottle. KENZO’s Creative Directors, Carol Lim and Humberto Leon, have united with evian to convey their graphic, intimate vision for this one-of-a-kind creation unveiled at Paris Fashion Week and available in the U.S. beginning November 2014.

The mysterious and strange oeuvre of artist and director David Lynch influenced the KENZO Fall-Winter 2014 collections for men and women, and it is in this vein that the bottle’s motif was created. The design features a broken floor pattern, toying with the idea of shifting the elements. 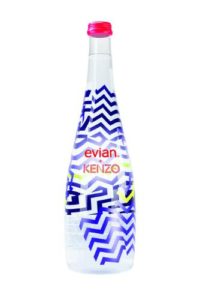 Offering a magnifying glass effect when full, the bottle’s purple fragmented pattern is penetrated by a sole lime zig-zag, giving the holder a distorted and skewed view of its ultra-pure contents.  Born in the purity of the Alps, dressed with a twisted spirit, the bottle embodies a naturally playful energy:  a theme that united the two brands.

Since 2008, evian has been working with the world’s most prestigious designers to create a Limited Edition bottle. Through the creative vision of artists such as Diane von Furstenberg, Paul Smith, Jean-Paul Gautier, Issey Miyake and Elie Saab, each collaboration is a renewed celebration of purity and playfulness, and a reinterpretation of evian’s spirit through art and design.