By Newsroom on July 26, 2013Comments Off on Exciting Young Chef Jamie Porter to Head Up the St. Moritz Kitchens 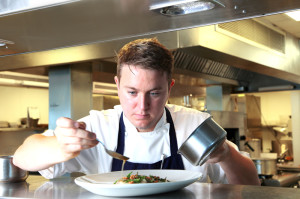 Jamie Porter, one of the UK´s brightest young culinary talents, has taken up the position of head chef at the St Moritz Hotel in Cornwall. At the age of just 26, Jamie has amassed a wealth of experience, much of it alongside some of the nation’s best-known chefs.

One of his mentors is Cornish legend Rick Stein, under whom Jamie trained at St Petroc’s Bistro, before he went on to hone his skills at the internationally renowned, 3 Michelin star Waterside Inn alongside chef-patron Alain Roux.

The lure of Cornwall proved too strong however and he eventually moved back to Padstow for a position at Stein’s celebrated Seafood Restaurant.

Despite his relatively tender years, Jamie has developed a very individual style. He adopts a deceptively simple approach to his dishes, stripping them back so that the flavours come to the fore.

His various stays in Cornwall, not to mention his heritage as the son of a fisherman, have also given him an innate understanding – and appreciation of – local produce. The restaurant at St Moritz has long been committed to serving the finest British food, using predominantly Cornish ingredients, and will continue this ethos under Jamie.

Jamie will change the menu daily, publishing his dinner options by 5pm once he has purchased his fresh fish, brought ashore by the day boat fishermen, together with his locally sourced meat and vegetables.

Jamie had this to say about the appointment:

Cornwall’s status as a foodie destination is continuing to grow and restaurants like the St Moritz are at the heart of this culinary renaissance. I am so pleased to be back here. I will be building on the restaurant’s reputation as a champion of local ingredients but also bringing my own skills to bear. These are exciting times for the St Moritz as it continues to build its reputation as a year-round destination and I am looking forward to playing a key part in its plans.

Exciting Young Chef Jamie Porter to Head Up the St. Moritz Kitchens added by Newsroom on July 26, 2013
View all posts by Newsroom →