By Newsroom on January 6, 2014Comments Off on FDA Approves Salmonelex against Salmonella as New Food Processing Aid 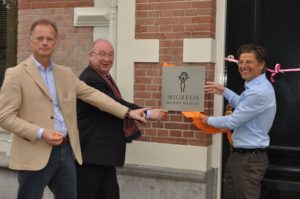 FDA & USDA announced today they have approved Salmonelex as a “GRAS” (Generally Recognized as Safe) food processing aid against Salmonella. The new product consists of natural phages against Salmonella and is produced by Micreos of The Netherlands. The company confirms that industrial scale projects with US poultry processors will start in January 2014.

According to a report published in December 2013 by the US Food Safety & Inspection Services of the USDA, Salmonella contributes most to the FSIS’s ‘All-Illness’ performance measure and Salmonella illness estimates have continued at a steady high or slightly increased rate despite FSIS interventions.

Each year, millions of people in the US become sick from foodborne infections. Large Salmonella outbreaks in 2013 have caused public concern.

Caroline Smith DeWaal, food safety director of the Center for Science in the Public Interest in Washington: “In this year’s Salmonella outbreak at Foster Farms, thirteen percent of those sickened have Salmonella septicemia, a serious, life-threatening whole-body inflammation. The Salmonella strains are showing resistance to multiple antibiotics, and that means more people are going to the hospital and their infections will be harder for physicians to treat,”

“Now that the FDA and USDA have given the green light we can offer food processors a new and natural solution against Salmonella, including antibiotic resistant strains. Salmonelex is seen as a very elegant solution as it targets only Salmonella and has no other effect on the treated food product, neither in taste, nor texture. Following the successful launch of Listex against Listeria, we are now further expanding the ‘green’ arsenal of weapons against foodborne pathogens. Given the prevalence of Salmonella in raw poultry, we expect poultry processors to be the first and largest users of Salmonelex”.

Salmonelex eliminates Salmonella, rather than merely inhibiting its growth. It is easy to apply: it can be sprayed topically or added to chill tank water. Micreos anticipates that it will soon be listed by the Organic Material Review Institute (OMRI) for use in organic foods, just like its phage product against Listeria, Listex.

Dirk de Meester, business development manager for Micreos: “Research has shown that Salmonelex does not dissipate in the presence of protein. Thus, the product enables processors to reduce the use of chemicals and reach Salmonella in places where antimicrobial chemicals are ineffective, for example in follicles which close when exposed to cold water in a chiller.”

FDA Approves Salmonelex against Salmonella as New Food Processing Aid added by Newsroom on January 6, 2014
View all posts by Newsroom →