By Newsroom on January 26, 2016Comments Off on Fray Bentos Sponsors ITV4 in New Campaign from Hometown

The Baxters food brand Fray Bentos is launching a series of idents for its sponsorship of ITV4 based around the theme of compulsive viewing. 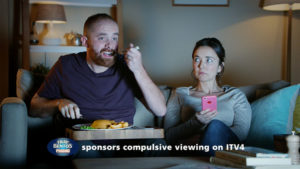 The idents feature the brand’s range of famous meals and are part of a new strategy devised by the agency to re-establish the iconic brand at the heart of UK culture. The sponsorship is the first work Hometown has produced since winning the account.

The idents, created by Hometown and directed by Stuart Elliot through Park Village, feature a married couple watching TV. The 10-second spots airing on ITV4, a channel predominantly aimed at a male audience, see the man engrossed in his dinner and television. This blissful moment is interrupted by his wife so, he responds in a tongue-in-cheek way, attempting to return to his programme and pie or pudding as quickly as possible. The line Fray Bentos sponsors compulsive viewing on ITV4 can be seen throughout. 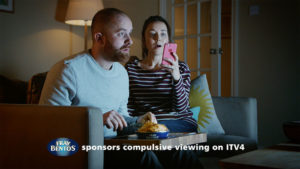 Gamble said: “I was surprised by the shear number of people with fond but distant memories about Fray Bentos. It’s a pie in a tin but it evokes so much emotion. There is a fantastic opportunity to rekindle these latent affections and create a role for the brand with a younger audience. This fun campaign is hopefully just the start of this revival.”

Fray Bentos have sponsored ITV4 between 9pm and 6am and will feature on all programming, apart from movies and football. The airtime value of the sponsorship package is £1.5m (according to MediaCom).

Fray Bentos Sponsors ITV4 in New Campaign from Hometown added by Newsroom on January 26, 2016
View all posts by Newsroom →