By Newsroom on June 8, 2016Comments Off on Frugal Rapper Lil Dicky Revels in the Value of Carl’s Jr.

In the 30-second spot, Lil Dicky emphasizes how affordable the $4 Real Deal is by parodying the lavish spending in rap videos while enjoying the combo meal. 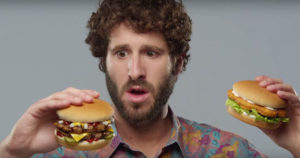 Between leaf-blowing money, caressing piggy banks and lying in a bath of pennies, Lil Dicky argues that the only thing more ridiculous than using money to fan your face is the value in a $4 Real Deal, a combo that includes a spicy chicken sandwich, a double cheeseburger, small fries and a drink.

The spot airs on US TV from Monday June 6.

Frugal Rapper Lil Dicky Revels in the Value of Carl’s Jr. added by Newsroom on June 8, 2016
View all posts by Newsroom →