By Newsroom on November 15, 2018Comments Off on Fuller’s Celebrates 173-Years of Brewing with New ‘Get Together’ Promotion 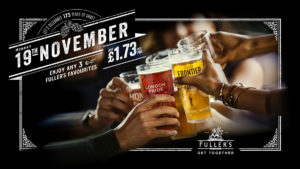 Fuller, Smith and Turner PLC, the London Brewer and premium pub company, is celebrating 173 years of brewing history on Monday 19 November by recognising the exact day that John Bird Fuller, Henry Smith and John Turner came together as business partners to create Fuller, Smith and Turner. Fuller’s is marking the day with the Fuller’s Get Together – celebrating with customers offering three Fuller’s beers and ciders for £1.73 per pint in its Managed Estate.

Customers, who are registered on the Fuller’s email database, will receive an invite to join a Get Together at their local Fuller’s pub where for one day only all Fuller’s beers and ciders will be £1.73 a pint. To download a voucher and a Get Together on Monday 19 November head here and sign up.

Nick Corden, Head of Retail Marketing, said: “The Fuller’s Get Together is a fantastic way of celebrating 173 years of outstanding beer and cider with our customers. Fuller’s pubs have always been at the heart of the community they are in, our beers are award winning and world renowned so what better way to celebrate the anniversary than by asking our customers to Get Together at their favourite pub with their favourite Fuller’s beers and celebrate 173 years with pints at £1.73.”

The promotion was devised by London based creative agency, ignis.

Fuller’s Celebrates 173-Years of Brewing with New ‘Get Together’ Promotion added by Newsroom on November 15, 2018
View all posts by Newsroom →