By Newsroom on October 3, 2014Comments Off on G.H.Mumm Becomes the Official Supplier of the Palais de la Legion d’Honneur 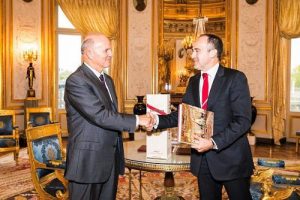 The prestigious House of Champagne, G.H.Mumm has announced it is the official supplier of the French Palais de la Légion d’Honneur. The partnership has grown from a relationship that has evolved throughout the heritage of these Houses.

The award-winning Cordon Rouge was created in 1876 and decorated with the red silk ribbon to symbolise the highest of French honours – the grand croix de la Légion d’honneur. The Cordon Rouge bottle became the symbol of the House from the 19th Century.

Now G.H.Mumm will continue to be part of the celebration, honouring the best of human achievements and contributions through its partnership with the Palais de la Legion d’Honneur.

“Something that was once created as a tribute to La Legion d’Honneur has become our most recognisable attribute, but the connection does not stop at the red ribbon. We are extremely honoured that our shared quest for excellence and mutual pride of our long-standing heritage are being celebrated with this partnership,” said Phillippe Guettat, Chairman and CEO for G.H.Mumm House of Champagne.

G.H.Mumm Becomes the Official Supplier of the Palais de la Legion d’Honneur added by Newsroom on October 3, 2014
View all posts by Newsroom →