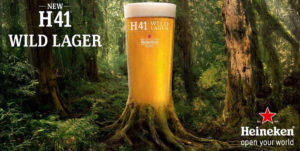 Heineken has launched H41, a limited edition Wild Lager brewed using a rare ‘mother’ yeast discovered in the deep forests of Patagonia. Developed over the course of multiple years by the brand’s Master Brewer, the new lager has a fuller taste, with spicy notes balanced by subtle fruity hints.

The name H41 is derived from the latitude co-ordinate of the beech forest in Patagonia where this yeast was discovered. The H stands for Heineken.

“Central to the famous Heineken taste is our unique A-yeast. It was first used 130 years ago by Dr. Elion, a Heineken brewer trained by Louis Pasteur. It is still used today. The exact make up of our A-yeast is a closely guarded secret,” commented Willem van Waesberghe, Heineken’s Master Brewer.

“However, when the ‘mother’ of our A-yeast was discovered in Patagonia, it presented us with a unique opportunity. Using our unrivalled expertise, Heineken’s Master Brewers began to work with the mother yeast to unlock a spectrum of new flavours. Our ‘Lager Explorations’ series was born. The taste of every beer in the series will be surprising and intense, but still balanced and refreshing.”

From a secluded region of the beautifully untamed Patagonia, Argentina we were presented with a rare gift that would ultimately become an incredible opportunity.

In 2010, an Argentine scientist, Diego Libkind was walking in the forests of Patagonia, and discovered wild mushrooms, which had a feint alcohol scent to them. With that clue, he hypothesised that his finding likely contained yeast. Diego collected it, and over the course of months conducted tests where he confirmed his initial hunch: he found a yeast that was perfectly suited to become the base of a “first of its kind” beer, a Wild Lager by Heineken. Heineken became aware of Libkind’s discovery, and very quickly was interested in attempting to tame the yeast for a potentially new brew of beer.

After two years of recipe perfecting by our Master Brewer Willem van Waesberghe to ensure the highest of quality standards, this “mother of all” lager yeast’s has given way to an easy drinking, full bodied beer, with a complex, yet clean taste. In return, Heineken has an exclusive license to brew with this amazing yeast. 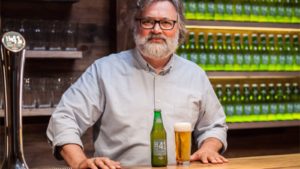 To honour the region to which this rare yeast was found, Heineken has named the special beer H41, after the longitudinal coordinate where it was discovered: 41 degrees south.

“The release of H41 in the US shows Heineken’s continuing commitment to innovation, discovery and quality,” said Katharine Preville, Brand Manager at Heineken USA. “Heineken has more than 150 years of passion for beer and brewing mastery, and H41 highlights that we will literally search the far reaches of the world to develop exciting brews for beer lovers.”

H41 appears at a time where beer drinkers are naturally looking for new and unique beers to try. Officially launching in the US in mid- October, the brew will be available on draught in New York City. The Wild Lager series will expand to additional US markets in 2018.