By Newsroom on February 3, 2017Comments Off on Heroes Vodka Designed by RRD Creative Pledges Profits to UK Armed Forces 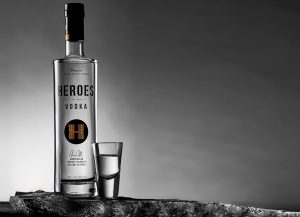 Heroes Vodka, a new distilled spirit brand has pledged to donate a minimum of 20% of the profits to UK armed forces charities. Heroes Vodka is a seven times distilled, full-bodied wheat grain vodka set up by ex-military veteran, Chris Gillan, who served three tours for the UK Armed Forces before setting out on his venture.

Chris Gillan, founder of Heroes Drinks said: “I have a vision for Heroes to carve a foothold in the market as the premium vodka of choice, appealing to vodka connoisseurs with a social conscience.”

RRD Creative were enlisted to create the brand identity and packaging design for Heroes Vodka, positioning the product at the upper end of the market, commanding a premium over Smirnoff and other well established brands.

Corey Stewart, creative director RRD Creative said: “With many brands the challenge is finding that compelling point of difference. With Heroes we had the luxury of a really compelling veteran story as well as product truths that elevate the quality of the liquid. The challenge here was finding the perfect balance between the two.”

Heroes Vodka is the first Scottish based company to gain listings of a new product in over 350 Asda stores nationwide and is showing strong initial sales having launched just recently.