By Newsroom on August 6, 2014Comments Off on Home Baking Set to Crumble? Brits Baking at Home Falls in the Past Year

As The Great British Bake Off begins another series, many amateur bakers across the nation will be donning their aprons in anticipation. However new research from Mintel reveals that the number of Brits baking in the home is falling. Whilst over five in six (85%) UK adults baked at home in 2013, this figure has dropped to just over three quarters (77%) in 2014.

Defying the downturn however, retail sales of cake coverings, decorations, culinary aids and cooking chocolate are expected to rise to the occasion, with 2014 sales of these products predicted to be up 80% on 2009 with sales growing from £98 million to an estimated £176 million.

“Consumers’ tendency to spend more time in the home to save money during and after the recession provided an ideal climate for home baking to thrive in. Nowadays there are a vast number of sources for bakers to get inspiration from – with The Great British Bake Off proving to be a runaway hit. However, with the economy rebounding, consumer confidence improving and people more willing to go out and have fun, home baking faces intensifying competition for people’s free time.”

“Furthermore, while concerns about health are nothing new, the escalating debate surrounding the dangers of sugar in 2014 is likely to have been particularly damaging to the home baking market. Home baking brands can do more to ensure they appeal to health-conscious consumers, emphasising that there are many ways to experiment with healthier baking.”

Indeed, Mintel’s research shows that consumers may be turning away from the calorific side of baking and taming their sweet tooth, with a third (35%) of Brits who have baked at home in the past year saying they limit how often they bake sweet goods for health reasons. A further three in ten (31%) agree they often look for ideas to make recipes healthier. For those that have baked partly from scratch, a quarter (25%) say they choose products low in sugar or sugar free, or low in fat or fat-free (24%). 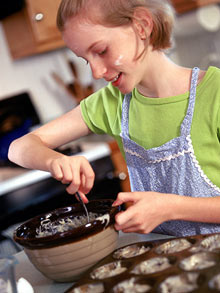 When it comes to star bakers, consumers who bake at least once a week are most likely to be 25-34s, parents with under-16s and large households of five or more people, emphasising the family appeal of baking. Brits aged 25-34 bake at home the most, with two in five (39%) of this age group baking totally from scratch once a week. Further to this, the research shows 86% of Brits with children aged 6-16, and 83% of those with a household or four, and 82% of those with a household of five or more bake totally from scratch.

“In order to maintain the appeal of baking as people spend more on other leisure activities, brands can focus on the importance of baking as a life skill, and one which should be handed down through the generations. In this way, they could encourage the older generation to teach their grandchildren how to bake. As well as a learning activity, this can also be positioned as a means for them to spend quality time with their families.” Emma continues. 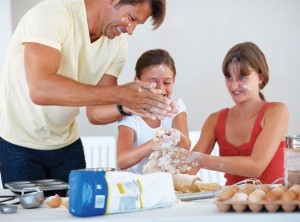 Judging the UK’s signature bakes, standard cakes (e.g. Victoria Sponge) are the most popular choice with 65% of bakers making these totally from scratch in the past 12 months, with 57% making small cakes (e.g. cupcakes) in the past year and 55% making batters (e.g. Pancakes).

Finally, the research shows the most bakers who bake from scratch are found in the South West and Wales (76%). Meanwhile, three quarters (75%) of Londoners and consumers in the North West and Yorkshire and Humberside bake, 72% in South East and East Anglia, 71% in the East and West Midlands and 69% in the North and Scotland.

Home Baking Set to Crumble? Brits Baking at Home Falls in the Past Year added by Newsroom on August 6, 2014
View all posts by Newsroom →