By Newsroom on December 12, 2017Comments Off on HoneyBaked Ham Says its Hams are Better than Home Baked for Holiday Gatherings in New Ad

The Honey Baked Ham Company launched its 2017 holiday campaign. It includes the brand’s first television advertising in over 10 years and was created by BBDO Atlanta, the company’s new creative agency partner. The platform is based on The Honey Baked Ham superiority versus other hams.

The Honey Baked Ham Company CMO Jo Ann Herold says: “We are excited to be celebrating our 60th anniversary this year. We are thrilled to be working with BBDO Atlanta, and launching this new TV campaign for the holiday season.” 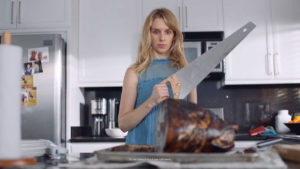 The new film features a 30-something young woman, deciding to bake a ham for the big family dinner for the first time – a task which proves to be harder than it looks. Through some light-hearted fun with everything from smoke alarms to heavy duty carving utensils, the spot sets up choosing The Honey Baked Ham as the clear choice for viewers.

The campaign launched on December 11th and includes :10 and :30 second TV films along with radio and social, all running nationally through the holiday season.

“The Honey Baked Ham Company is an iconic brand that’s ready to act and feel more modern,” says Robin Fitzgerald, Chief Creative Officer of BBDO Atlanta. “We couldn’t wait to kick off our relationship with this holiday work and are looking forward to helping the brand build even more momentum next year.”

HoneyBaked Ham Says its Hams are Better than Home Baked for Holiday Gatherings in New Ad added by Newsroom on December 12, 2017
View all posts by Newsroom →