By Newsroom on October 8, 2015Comments Off on How Campbell’s Is Offering Recipes via Amazon’s Voice-Control System 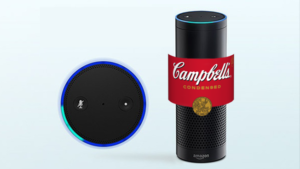 Amazon is trying to make our homes resemble the futuristic dwellings of The Jetsons, the late 20th-Century cartoon about a family in space. And brands are getting on board.

The latest example is Campbell’s, which according to Adweek, is one of the first brands to offer content for Amazon Echo, the 10-month-old speaker system with voice-control technology. According to a source, people who own an Echo can ask it for several recipes a day from Campbell’s Kitchen, which is the consumer-goods giant’s portal for all things cooking.

The Echo user can then verbally select one of the recipes and hear the system’s voice app, Alexa, describe it. Alexa can evidently be instructed to email the recipe to the user as well. While we were not privy to a product demo, the Alexa app has a series of basic functions, including one for making lists, which is where the Campbell’s Kitchen recipes may be plugged into the larger experience.

The cutting-edge tech builds on the larger Campbell’s Kitchen initiative, which the Camden, NJ-based company has been cultivating in recent years as a resource for home cooks. On a marketing level, it’s designed to encourage consumers to buy more of its brands like Campbell’s Soup, Swanson, Pace, Prego and Pepperidge Farm while planning meals.

Meanwhile, Amazon Echo seems to complement Amazon Dash, the Internet retailer’s so-called smart buttons. Consumers can place the buttons around the house and press them to instantly re-order products like beverages, diapers, toilet paper and coffee.

Numerous brands, such as Gatorade, Gerber, Tide, Huggies, Kraft and Glad, have signed on to the Dash program. Consumers pay $5 for each button.

How Campbell’s Is Offering Recipes via Amazon’s Voice-Control System added by Newsroom on October 8, 2015
View all posts by Newsroom →