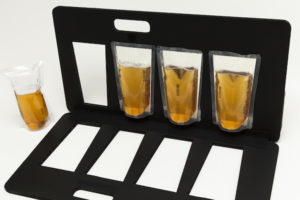 South Korean designer Wonchan Lee has created a concept redesign of standard beer packaging—instead of holding beer in aluminum cans or glass bottles, he has placed it in clear plastic bags.

Made for a fictional Belgium beer brand named “Leuven”, this striking and innovative packaging design is inspired by the ice bag and was honored at the A’ Design Award & Competition.

Each unit of this design can hold up to four bags of beer—they are held securely by two X-board panels, which closes up with velcro.

Designed to “differentiate itself from other premium Belgian beer competitors in the market”, the “Leuven” packaging creates an aesthetically pleasing image of the product by revealing the golden liquid to potential buyers.

Not only is this minimalist packaging easier to carry, but it is also unexpectedly hardy and cheaper to produce than then conventional six-pack.