By Newsroom on August 19, 2013Comments Off on Jack And Jill Went Up The Hill… To Chase A Wheel Of Cheese

At the sixth edition of the Canadian Cheese Rolling Festival, hosted by Dairy Farmers of Canada, more than 160 ambitious competitors and 11,000 cheese lovers gathered together in Whistler, British Columbia – all for the love of Canadian cheese!  Canada’s most exciting and much anticipated festival featured cheese rolling races, a costume contest and other fun activities for the whole family. 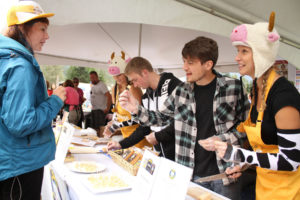 “The Canadian Cheese Rolling Festival was a huge success!” says Sandra Da Silva, program manager, public relations, Dairy Farmers of Canada. “Dairy Farmers of Canada was thrilled to showcase the wonderful cheese produced in this country and share the love of cheese with Canadians and visitors from all over the world again for the sixth year in a row.”

In addition to the races, cheese lovers took in a host of other fun activities including cheese Twister, free cheese seminars and a Cheese Market full of delicious samples of Canadian cheese made from 100% Canadian milk.

Jack And Jill Went Up The Hill… To Chase A Wheel Of Cheese added by Newsroom on August 19, 2013
View all posts by Newsroom →