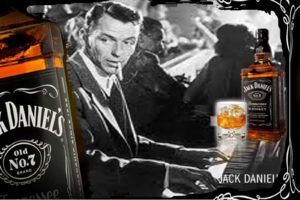 The true and timeless relationship between Frank Sinatra and Jack Daniel’s has received a satisfying salute with the Canadian launch of Sinatra Select. Destined to be remembered as one of the finest releases by Jack Daniel’s, this special edition Tennessee Whiskey celebrates a legendary friendship that lasted more than half a century.

The barrels used to make the product were crafted to provide an extra full character and darker rich amber colour by exposing the spirit to extra layers of toasted wood on the inner surface of the barrels. The extra rich barrels were mingled with classic Old No. 7 Tennessee Whiskey and bottled at 90 proof resulting in a character that is full of oak and spice notes with an exceedingly smooth vanilla finish. The smooth, bold character of the whiskey is meant to embody the smooth, bold character of Sinatra himself.

Sinatra Select honours Frank Sinatra’s loyalty to Jack Daniel’s. Look on stage any given night and you would see Frank Sinatra, in his trademark tuxedo, captivating audiences everywhere. Look a little closer and his favourite drink, Jack Daniel’s Tennessee Whiskey, wouldn’t be far away.

“Dad would be very flattered by the association. This fine Tennessee Whiskey, or Old No. 7 as he referred to it, was a favourite part of my father’s life and he loved both sharing it with his friends and introducing it to new acquaintances,” said Frank Sinatra Jr. “I’m very pleased to continue to be a part of the Jack Daniel’s family and feel the introduction of Sinatra Select is an appropriate tribute as we near my father’s 100th birthday in 2015.” 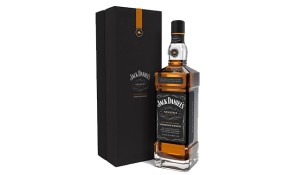 The classic, black Sinatra Select bottle depicts flashes of orange, said to be a favourite colour of Sinatra’s. Packaged in a sleek, limited edition box, Frank Sinatra’s signature and iconic fedora hat are found on the bottle, along with the Jack Daniel’s Country Club logo, designed by ‘Ol Blue Eyes himself. Also enclosed is a booklet telling the captivating story of the legendary relationship between Jack Daniel’s and Frank Sinatra.

Independent in character, with an appealing smoothness, it is no surprise Frank Sinatra found a friend in Jack – a relationship that Jack Daniel’s will be extending to whiskey lovers in Canada beginning November. Jack Daniel’s Sinatra Select is being launched with a very limited release – in select stores in various provinces across Canada including British Columbia, Alberta, Saskatchewan, Manitoba, Ontario and Quebec. Retail price varies from province to province, but is averaging $299 per bottle.